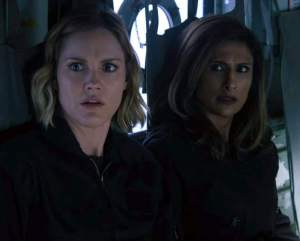 Despite regularly Googling Beth Dover’s name (in a totally professional, and not-at-all creepy way), the release of a Childrens Hospital sequel/spin-off* caught me totally by surprise. Medical Police is an action-packed parody of globe-trotting spy thrillers, combining the extremely silly humour of its predecessor with impressive stunts and exotic locations, as out-of-their-depth Doctors ‘Lola Spratt’ (Erinn Hayes) and ‘Owen Maestro’ (Rob Huebel) are drawn into a shadowy conspiracy involving a deadly manufactured virus. Although they start out on familiar turf, surrounded by the regular Childrens cast (including Dover as ‘Nurse Beth’), by the end of the first episode they’ve been seconded into a super-secret bio-crime-fighting agency (led by Sarayu Blue), and air-dropped into Berlin!

That’s as far as I’ve watched so far, because I know from previous experience that this sort of humour is best enjoyed in small doses… though I did make the mistake of watching it just before checking out a new crime drama called Lincoln Rhyme: Hunt for the Bone Collector**, which was much harder to take seriously as a result. Still, for all its creaky clichés, I hope it’s a success, because I like the premise of a rookie NYPD beat-cop becoming the trusted “point person” for a legendary/bed-bound criminologist… especially when the officer in question is played by Arielle Kebbel, who I’ve always had a soft spot for…

———–
* On Netflix, because apparently they own everything I watch now…?
** In their case, “Murder Police” might have actually been a less silly option…

It has taken me a shamefully long time to get around to watching Nikki Glaser’s new stand-up special Bangin’, which was released on Netflix waaay back in October of 2019, and is full-on hilarious from start-to-finish! Fair warning though, she does spend roughly half the running time talking about blowjobs (and the other half talking about other sexy stuff), so it’s certainly not for the prudish… but she does have a remarkable talent for balancing rudery with endearing self-deprecation, while playing to both (traditional) genders equally in turn, and even manages to sneak a sly Shakespeare quote into a bit about sticky bed-sheets!

In short, Glaser is a marvel, and I bow to her mastery of the art-form. Moar please!

“You Sure You’re Old Enough To Drive?”

The premise of Fox’s new modern-day-cowboy cop-show Deputy is patently absurd*, with an insubordinate Deputy Sergeant being hastily sworn in as Los Angeles County’s (Acting) Sheriff, after the sudden death of his superior… and its politics are all-over-the-shop, with him acting like a typically macho, red-meat-chewing, scenery-destroying lawman when it comes to catching certain perps, while also cheerfully putting his own career on the line to protect illegal immigrants from deportation, and enthusiastically accepting various minority characters into his extended “family”… and the first episode is a haphazard mess, overstuffing a feature-film’s worth of plotting into half the necessary screentime (as pilots often do, I know)… but, dammit, I still had a good time watching it, and I’m hooked in for at least another couple weeks, thanks largely to an assured lead performance by Stephen Dorff, and the sparky rapport he has with baby-faced badass Bex Taylor-Klaus, who plays his character’s “practically perfect” driver/bodyguard! If I were still in the fan-art game, she’d be next on my “to draw” list f’sure!

Sadly, the real critics don’t seem to share my enthusiasm, and I can’t help thinking the show’s flagrant “wokeness” is going to deter a sizable portion of its potential audience, so I wouldn’t want to wager on how many episodes will actually make it to air…

———–
* Though not nearly as implausible as the premise of Banshee, and that show ran for four seasons!

Despite impassioned endorsements from some of my fave music-makers (such as Lily Allen, M.I.A., and Paloma Faith), and comedy-types (such as Kerry Godliman, Jessica Knappett, and Lazy Susan), plus plenty websites springing up to explain “tactical voting” options region-by-region, the UK Labour Party not only failed to make a dent in their main rival’s majority, they actually managed to lose a shedload of former supporters and supposedly “safe seats” in this election! I happen to live in a Tory stronghold, where their incumbent candidate regularly wins almost twice as many votes as all of his competitors combined, so there wasn’t much danger of unseating him here, but still I naively hoped we could at least make him sweat for it this time around. Hah! Nope.

In the acrimonious post-mortem, a lot of critics (from all corners) are laying the blame for the party’s dismal defeat at Jeremy Corbyn’s feet, and I have to say I was never particularly keen on him running the country either… he was simply the lesser of two evils, in this instance. In fact, I can’t recall any major British politician ever inspiring any sort of fannish enthusiasm in me, in all my twenty-odd-years as a voter… certainly not enough to want to wave a sign at their rallies, or buy a hat with their slogan on! Sigh… I don’t suppose there’s any way we could draft Elizabeth Warren or Alexandria Ocasio-Cortez in as the opposition leader, is there…?

Note: The above photo was taken from M.I.A.’s Twitter, but I pasted the emblem over her son’s face, for the sake of his privacy. I mean, obviously more people are going to see it on her “socials” than on mine, but I was trying to be respectful…

On a random whim I went to check out Emily Perkins’s IMDb page t’other day, and was met with a decidedly mixed blessing: On the upside, there was a shiny new credit on her filmography, but on the downside, it was for yet another episode (#15.4) of Supernatural, the macho monster-hunting show in which she plays obsessive fangirl ‘Becky Rosen’. Meh.

Despite my misgivings (and long-standing issues with this show), I have to applaud the writers for devoting so much screentime in their final season to redeeming her character. When she last appeared, back in ep #7.8 (“Season Seven, Time for a Wedding!”), Becky had reached her date-rapey rock-bottom, tricking ‘Sam Winchester’ (Jared Padalecki) into loving/marrying her using a demonic potion… but thanks to some “extensive therapy”, she’s now matured and settled down in the suburbs with a (presumably non-drugged?) husband and kids, living an apparently happy/stable life writing fanfic and selling unofficial Supernatural merchandise on Etsy. Yay! That is until she’s visited by ex-boyfriend ‘Chuck’ (Rob Benedict), who (unbeknownst to her, but knownst to me because I read the Wiki) is actually the “God” of their universe, and not merely a prophetic author she dated back in the day. He’s down on his luck, and trapped on Earth, doubting/hating himself, when he comes looking to her for a morale-boost… and she eventually manages to get his creative juices flowing again, only for him to make a sharp “heel-turn” when she critiques the new downer story he’s written about/for the Winchesters. Somehow this then culminates in him erasing Becky (and her family) from reality, so that he can have the peace and quiet he needs to finish his doom-laden plot (presumably for the series finale?). I actually felt a genuine twinge of grief when he vaporised her with a snap of his fingers (the Wiki rather generously calls this a “nod to” Avengers: Infinity War, rather than a blatant rip-off), and I’ll credit that entirely to Perkins’s performance (and my pre-existing affection for her).

So, it was a pretty bitter-sweet experience, all things considered… wonderful to see Perkins working her beautifully intense magick on screen again, but also a reminder of just how few-and-far-between such opportunities are these days. She deserves ubiquity, but seems to have faded into obscurity! Saying that, I know that some actors don’t actually want to be big stars (because of the pressure, and the demands it would make on them), so there’s no reason to believe she isn’t happy with her lot, and living her best life off-screen… but, at the very least, she deserves her own Funko figure, dammit!

Meanwhile, I’m left wondering if Becky will return for a resurrection curtain-call at some point? I guess I’ll have to keep a closer eye on IMDb for the next couple months to find out… sigh…

Hurrah! American Horror Story actually managed to stick the landing of its ninth season (aka “1984”), concluding a consistently absorbing/amusing story with a surprisingly sweet/upbeat ending! Sure, there was a lot of bloody violence, disorienting time jumps, and shaggy digressions along the way… but overall, this is probably the most emotionally satisfying and entertaining season to date. I haven’t watched S1 (“Murder House”), S2 (“Asylum”), or S3 (“Coven”) recently enough to be able to compare/rank them all here, but this season is definitely up there somewhere with that classic “hat trick”, and well above anything else this show has produced in the intervening years*, thanks to a healthy humour-transplant from Scream Queens (in fact, it also serves as a much better follow-up to the first season of that show than its actual sophomore effort did, imho). That said, this still has to rate as one of the worst adaptations of George Orwell’s prophetic novel ever produced. Ho ho.

Sadly Dreama Walker didn’t return for an encore, but we did get a great 3-episode-arc involving Lily Rabe’s ethereal/vengeful “Lady in White”, and a very funny turn by Dylan McDermott as a sleazy aspiring-serial-killer, so I’m certainly not complaining. I don’t really want to single out an MVP from the ensemble this time around, because everyone played their parts so well, but it was gratifying to see Billie Lourd get the chance to show so much range over the course of the season (while simultaneously getting stuck with a truly heinous 80’s hair-do).

My Hallowe’en got off to a rather dismal start this year, when the local “Zombie Fest” got cancelled due to crappy weather, and I was reduced to skulking around the dull, undecorated shopping centre/mall, in soggy clothes. Thankfully, that disappointment has been abated somewhat by “pumpkin spice” bagels, Jenny Nicholson’s video about her spider-review-reading hobby (!), and Bailey Meyers posting a totally on-point selfie in Wednesday Addams cosplay! Hurrah for the internets!

Meanwhile, I decided it was high time I got cracking on the Conjuring franchise, after a friend alerted me to the fact that I was already seven movies behind! I decided to watch them in release order, and not worry about the in-universe timeline, so that meant starting with The Conjuring (2013), which is set in 1971, and tells the “true” story of a haunted/cursed house in Rhode Island. On the plus side, there are a lot of literally chilling scenes/scares (mostly involving a childhood game called “Hide and Clap”), and a strong (mostly female) cast, including Vera Farmiga as real-life demonologist Lorraine Warren and Lili Taylor as the mother of the unfortunate family who require her (and her husband’s) urgent intervention. I also really appreciated the upbeat/uplifting resolution*, even though I’m aware the numerous sequels might retroactively undo/undermine it…? On the downside, having seen movies based on (or inspired by) the Warrens’ work before, I couldn’t help feeling a little déjà vu here… I also have a long-standing objection to writers taking “dramatic licence” with real people’s lives/deaths… but overall, I enjoyed this old-school spook-show, and will definitely be checking out the rest of the series, as time allows.