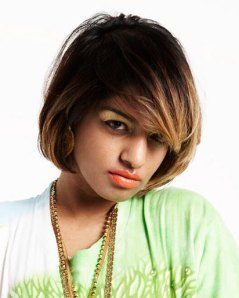 Yesterday I picked up a copy of the second M.I.A. album, Kala. Looking it up on Wiki, I then realised that it had actually been out for almost a year! As ever, I was waiting for the price to drop, because I have an allergy to paying full price for anything. Take that, Capitalism! But my reticence shouldn’t be taken as any sort of slight on Miss Arulpragasam, who is one of the most exciting and interesting artists this country (via Sri Lanka) has produced in recent years.  Check out the “Galang“ video and you’ll see that on top of all that, she’s a pretty nifty mover too. It took me a while to get around to buying the first one (Arular) when it first came out too, but that was because I refused to believe the hype. There’s just that natural turn-off factor when all the cool “hipster” rags are telling you that something is great… because it’s pretty much their job to build people up, then knock them down and move on to the next trend. But even a broken clock is right twice a day, and sometimes these critics actually know what they’re talking about it. It happened with the White Stripes, and it happened with M.I.A.

In light of the warm welcome Kala received in America, it’s weird to think that the album almost didn’t happen at all because Arulpragasam was denied access to the country (and the apartment where her demos and equipment were kept), because of problems with her visa. The other day I was reading about how the French actress Béatrice Dalle was refused entry into the U.S., to take a role in The Sixth Sense, because of her history as an “activist”. She was actually defined as an “undesirable”! Clearly whoever slapped that label on her had never seen Betty Blue. Still, it must be very reassuring to live in a country where your neighbours can stockpile guns, but pesky foreigners are prevented from getting their hands on four-track tape recorders and film scripts.

Er, I haven’t written anything about the album itself yet, have I? That’s because I’m so useless when it comes to reviewing things I like. I can rant for hours about stuff I dislike, but when something just hits the spot, and scratches an itch I never knew I had, then it’s hard to put that into words without sounding wanky. As the previous sentence proves. I just love her sense of humour, and the jagged aural edges, and the constant culture-shock-value. Her music always reminds me that I’m part of a much larger, more complicated world than most mainstream pop-culture would ever allude to. Some people think “multicultural” is a dirty word, but I disagree… especially when multiculturalism rocks this hard. The songs don’t seem quite as catchy as my faves from the previous album, but there’s still plenty of time for them to grow on me.

A comic book writer with an interest in feminism, philosophy, and affirmative action.
View all posts by Dee CrowSeer →
This entry was posted in Rants about Films, Rants about Music and tagged 37° 2 le matin, Béatrice Dalle, Betty Blue, Galang, Kala, M.I.A., Mathangi Arulpragasam, The Sixth Sense. Bookmark the permalink.
%d bloggers like this: