Hunting of the Snarky

Last night Ch4 showed Failure to Launch (2006), a romantic comedy starring Matthew McConaughey as a ruggedly handsome, extreme sports dude who still lives with his parents, and Sarah Jessica Parker as the creepy, manipulative woman who is hired to help inspire him to leave home… essentially by prostituting herself, on the parents’ dime. Ew. Normally the draw for me would have been SJP, who I’ll always have a soft spot for, but her character was so unlikable that all interest in her evaporated the moment her snarky house-mate (played by Zooey “Zoey” Deschanel) appeared on the screen. Yay! Loving her work. To be honest though, looking at her filmography, I think I’m more interested in her as a musician than as an actress right now.

Only once in a blue moon does a really decent starring role for a “snarky, deadpan, brunette” type come along… and that’s a shame, because if I had to pick a favourite “type”, that one would be top of my list. Ellen Page, Christina Ricci, Thora Birch, Marina de Van, Parker Posey, Sarah Silverman, Winona Ryder, and Michelle Rodriguez have all excelled in supporting roles, but only rarely been allowed to take centre stage  (in some of my favourite flicks of all time… Hard Candy, The Opposite of Sex, Ghost World, See the Sea, Heathers, GirlFight). Heck, Big S had to make a solo stand-up film just to get top-billing, after becoming frustrated with playing “girlfriend” and “roommate” roles for which she was clearly over-qualified! In a cooler corner of the Multiverse, on some saner alternate Earth, I am happily toiling away for a movie studio that retains all these actresses as part of its “stable”, and puts out films like Ghost World every couple of months. In that universe it’s Scarlett Johansson who’s on the “Whatever Happened To?” list, rather than Birch. Dammit. 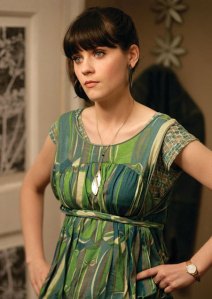 Most of the reviews of FtL seem to agree that Deschanel was the best thing in it, and that her character had a far more interesting story going on. As a writer, her character would have been my focus from the very start, because snarky, spiky types are simply more interesting to come up with dialogue for, and to follow through a story. They’re unpredictable, and volatile, and that often leads you down comedic paths that a more friendly and approachable character wouldn’t. Consider the scene where Deschanel is planning to buy a shotgun, so that she can take revenge on a mocking bird that’s keeping her awake at night… and she confuses “To Kill A Mocking Bird” for an instruction manual. It’s a throwaway gag, but it’s a million times funnier and smarter than pretty much everything else that happens in the movie. I love that sort of dark absurdity. Meanwhile, SJP is buying “boat shoes”, so she can wear shoes on a boat with her hunky man-toy… blah.

1 Response to Hunting of the Snarky