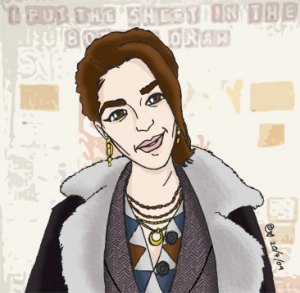 The day I went to see Tracey Emin speak at Oxford University was about as close to a perfect day as I’ve ever had. I know she’s a fairly easy target for tabloid snark, and general anti-Art antagonising, but I feel a genuine emotional connection with her work, and can attest that she is a very entertaining, smart and funny public speaker… and very graceful in the face of obnoxious heckling. She was also kind enough to hang around and sign autographs for everyone, even though she had a fancy dinner at the gallery to hurry off to.

Away from the Art, I appreciated her “memoir” Strangelands, but I think perhaps she could have done with a co-writer on her film project Top Spot… it’s often the case that films “based on a true story” can lack the narrative hooks (and humour) that make fictional stories so compelling. There are some very interesting ideas and scenes dotted throughout the film, but overall it’s more arty curio than audience-friendly box-office fodder. The controversy over its content once again raised the fascinating Art/Life paradox… i.e., a film which accurately and unflinchingly portrays the lives of a group of teenagers, can’t actually be shown to other teenagers, because the film classification board is much stricter about what young people are exposed to than the real world is.

A comic book writer with an interest in feminism, philosophy, and affirmative action. He/him.
View all posts by Dee CrowSeer →
This entry was posted in Rants about Art, Rants about Books, Rants about Films and tagged Strangelands, Top Spot, Tracey Emin. Bookmark the permalink.