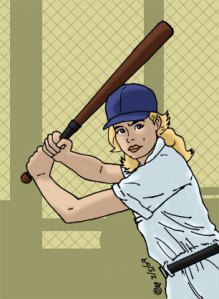 Watched A League of Their Own for the first time this weekend. I think it’s safe to say that this is the only Madonna film I’m ever likely to own… but sneering aside, she does a good job here, and really comes alive in the jitterbug scene. I barely recognised Lori Petty with hair, having become so used to seeing her shaven head poking out through a tank hatch, but I guess that’s also a compliment to her acting. Apparently she recently wrote and directed her own feature film, which could be good, but I still think it’s a shame that Brimstone never made it to a second season. Meanwhile, Rosie O’Donnell is very funny, and it’s always great seeing Jon Lovitz work his magic, but ultimately the star attraction here is Geena Davis. I’m not in the least bit surprised that she was elected America’s first female President, because the woman sweats star-quality from every pore of her body! Despite appearing in an atrocious pirate movie that cannot be named, she earned major points from me for her turn as the funnest female assassin of all time, ‘Charly Baltimore’, in The Long Kiss Goodnight… a flick which remains annoyingly underrated, despite the impressive cast and smart script.

As if Davis weren’t loveable enough on-screen, she’s apparently quite a trouper off-screen as well, fronting the Women’s Sports Foundation campaign to prohibit gender discrimination in United States’ educational institutions. She also launched The Geena Davis Institute on Gender in Media in 2007 which, according to Wikipedia, “works collaboratively with the entertainment industry to dramatically increase the presence of female characters in media aimed at children and to reduce stereotyping of both males and females.” Coolness. On the subject of discrimination, I was also touched by the brief scene in ALoTO acknowledging the absence of black women in the teams. Apparently the so-called “Negro Leagues” only ever recruited a handful of female players, and they were subjected to a great deal of abuse, as they were forced to play alongside resentful menfolk. I can only admire these sportswomen, and the gals of the AAGBL, for the drive and dedication that they showed in the face of stupid, stinky, pointless prejudice. I sure as hell wouldn’t have wanted to piss any of them off when they were carrying a bat…

A comic book writer with an interest in feminism, philosophy, and affirmative action.
View all posts by Dee CrowSeer →
This entry was posted in Rants about Films and tagged A League of Their Own, all-girl baseball, Brimstone, Charly Baltimore, Geena Davis, Jon Lovitz, Lori Petty, Rosie O'Donnell, The Geena Davis Institute on Gender in Media, The Long Kiss Goodnight, Women's Sports Foundation. Bookmark the permalink.