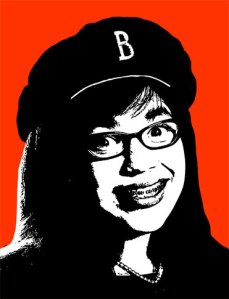 Last night I watched the first part of the new Shirley Henderson comedy May Contain Nuts. To get her underachieving daughter into a fancy new school, Henderson decides to substitute for her at the vital entrance exam. Realising that the 30-something woman will never pass for a “pretty” eleven year-old girl, no matter how tiny and wee she may be, her husband hits upon the notion that if they make her sufficiently hideous, then no-one will look twice and everything will be fine! And how, you may ask, is this ugly-over achieved? Well, they grease down her hair, cover her face with spots, then slap some glasses and braces on her. Eureka! Because, as we all know, glasses and braces are the stigmata (or “ugmata”, if you will) of the “unattractive and unpopular” in mainstream media. Jan Brady and Betty Suarez are classic examples, but glasses and braces also feature prominently when Emily Perkins appears in girly teen comedies such as Another Cinderella Story and She’s The Man. In the latter, they even go so far as to lumber her with headgear and asthma, in a desperate attempt to stop her stealing the spotlight from the starlet lead… but she still manages to look super pretty once she gets all gussied up for the ever-so-slightly-sapphic “double date” scene.

I guess I’m a little biased on the glasses front, but I never understood the supposed ugliness of braces either. A girl I went to university with had braces, and it certainly didn’t stop me getting a serious crush on her… and it didn’t stop William H. Macy in Magnolia either! Earrings are considered a perfectly acceptable part of The Beauty Process, even though they’re basically just studs/rings of metal forced through the skin… but wearing metal on the teeth is somehow freakish and wrong? That’s illogical, Captain. I’m not a big fan of piercings of any kind, because they just make me think of needles and blood and such… and at least glasses and braces serve a practical function. But I guess that’s where geeks like me always go wrong, respecting practicality over arbitrary social conventions, as regards fashion and beauty. Sigh.

1 Response to Brace Yourself