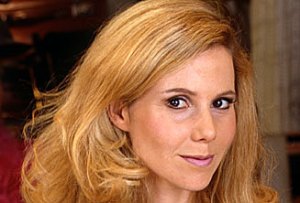 Over the last few weeks I’ve been having something of a Sally Phillips-fest… entirely unintentional, but very pleasant nonetheless. First I picked up a s-hand copy of The Best of Smack the Pony, then a new series of Jam & Jerusalem started on TV, and last Monday I found the complete Green Wing on sale in HMV for twenty quid (which is practically giving it away!). After Kylie Minogue, Phillips is probably my longest standing crush… and she’s just as funny and adorable today as she was back in 1995, playing ‘The Girl Who Smelled of Spam‘ (among other characters) in Fist of Fun. She’s probably best known to international audiences as Bridget Jones’s sweary friend ‘Shazzer’, and while contemplating the possibility of another sequel she jokingly suggested that she might need Botox to stop her looking like Bridget’s mother… but anything that immobilises her face would, of course, be a crime against comedy… so I might start a petition to have her smile designated a “national treasure”. 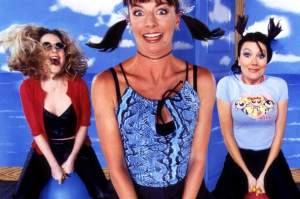 It still bugs me that the full run of Pony has yet to be released on DVD in this, or any other country. I was never a big fan of their song parodies, but they stand up on their own as amusing musical interludes, now that the artists they’re parodying have faded from memory. Everything else on the Best of disc has “aged” very well… and it’s a pleasant reminder of the days when sketch shows didn’t lean so heavily on catchphrases and characters. Although many of the sketches are thematically similar (competitive women being a favourite fallback), they always feel fresh and “organic”. Even when they aren’t laugh-out-loud funny, it’s still fun to watch the cast banter with each other. A lot of the sketches would be funny regardless of the performers’ gender, but there are also a lot that play on female identity and interests… such as the computer game parodies featuring a “girly” type (Phillips), who stops halfway around a Grand Prix race track to do some shopping at M&S, and wins a Mortal Combat by closing her eyes and frantic slapping her opponent’s wrists. Considering how many comedy shows still consign female performers to the fringes, as WAGs or token shoe-fetishists, it’s a crying shame that Pony has been so cruelly overlooked and left to gather dust in some secret Channel 4 stable somewhere.

One reason (among many) to admire Jennifer Saunders, is that her shows always boast strong female casts. Overall, Jam & Jerusalem is much, much mellower and more sentimental than AbFab, but as a country bumpkin myself, I’m glad there’s a sitcom on the air that isn’t trying to make us care about big city showbiz agents and the like. For some reason they’ve decided to show the new series in three hour-long blocks, rather than six half-hour blocks… even though it was clearly written that way. Still, it means a bumper infusion of Phllips as ‘Tash’, so I’m all for it. Although I do object to the mocking of ineffectual hippie-types who still live with their parents, because it hits so close to home, she did allow me to vicariously enjoy my fantasy wedding, in the woods with everyone dressed as faeries, a la A Midsummer Night’s Dream. For that at least, I’ll always be thankful. 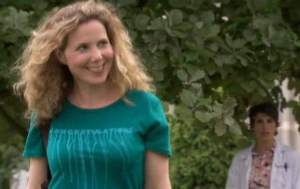 In a slightly less idyllic, though nonetheless “magical” setting, we find Phillips appearing as ‘Dr Holly Hawkes’, one of the many, many hurdles that are thrown in the path of aspiring lovers ‘Caroline’ (Tamsin Greig) and ‘Mac’ (Julian Rhind-Tutt). Scrubs may have come first, but I think it’s fair to say (without any patriotic bias whatsoever) that as far as a surreal hospital-set comedies go, Green Wing poops on it from a great height. It’s really remarkable how ambitious GW is… aside from the length of the shows, and the complexity of the format, the tinkering with speed and generous smattering of genuine surrealism (as opposed to the wanky “wackiness” of Scrubs) adds up to bona fide Art. You also have to applaud the fact they were able to film all of the required footage on location, in and around several working hospitals. Obviously it must have been a nuisance for the staff, patients and visitors at the time… but the authenticity it adds to the ambience is priceless. It roots all of the insanity in a grubby, well-worn reality, which conveniently distracts attention away from the fact that very little serious doctoring is ever actually done. 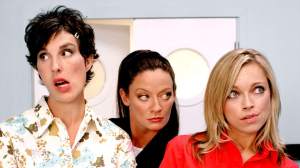 As with J&J, the show has a very strong female cast, including Sarah Alexander (aka “The Fourth Pony”), lovely Olivia Colman, the fearless Pippa Haywood, and even Daisy Haggard in a small recurring role. Towering above them all, however, is Michelle Gomez as the demented ‘Sue White’. I’m not sure if she’s a “character” so much as a maelstrom of profanity, bisexual harassment and Harpo Marxism… but I love her scenes more than any others, and I was very excited to find that the DVDs feature entire “deleted” skits from her office-based shenanigans. Hurrah! I’m hoping to draw Greig for another post, so I’ll skip her for now… but all concerned do a bang up job. It was interesting to note that the fans who attended the signing and convention filmed for the bonus disc in this boxset, were overwhelmingly womanly. Presumably that has something to do with the rom-com elements that provide the main arc for the series, and the hunkiness of many of the male cast members, but also the spiritual debt that many of the scenes owe to Pony, even if overall the journey is a very dark and strange one.