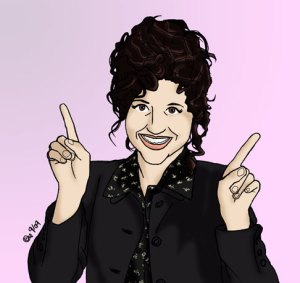 Apparently in America, the sitcom Seinfeld was a big hit… one of the most influential and critically acclaimed comedies of the 90s… while over here, the BBC chose to bury it in a graveyard slot, with minimal promotion, so it never caught on in quite the same way. I remember sitting up until midnight, with the TV turned down as low as it could go, trying to enjoy the show without waking my parents. Good times. Now, thankfully, the entire run is available on DVD and all the extra features crossed the pond with them. Last month I managed to find the Season 9 boxset on sale, and have been working my way through it. After such a long gap, it wasn’t the best place to start, since the final four episodes of the run are filled with callbacks to episodes I haven’t seen or can’t remember. Still, the other 22 are very funny in themselves, and fantastically bizarre. I understand that some people objected to the direction the series took after Larry David left, turning away from the reality-rooted focus on social minutiae and awkwardness that is his calling card. Maybe they’re right… as I say, I can’t remember much about the early seasons… but that doesn’t stop me hailing “The Merv Griffin Show” episode as a work of genius, with ‘Kramer’ dragging the other characters into his own delusions via a reclaimed TV chat show set. Love it.

Even back then, I was drawing little cartoons of ‘Elaine’ on the labels of my home-made video tapes… inspired by how cute she looked in episodes like “The Strike” and “The Burning”, pouting with disappointment over the possibility of losing a hard-earned sub sandwich, or burning for all eternity in Hell. I’ve now learned that I’ve been mispronouncing Julia Louis-Dreyfus’s name all this time (it’s “dry-fus”… not “dray-fus”), but there’s no mistaking the brilliance of her performance, as she slips from eye-rolling snark to energetic slapstick. I was glad to learn that she’s had a successful post-Seinfeld career, in her own award-winning sitcom, The New Adventures of Old Christine. Hurrah! Why the same hasn’t happened for Jason Alexander, I can’t really say… clearly he isn’t as cute as his co-star, but come on… the guy does impotent rage better than anyone out there. Michael Richards rather shot himself in the foot with his ill-advised foray into stand-up… but he’s still a master of physical comedy, and gives some of the most memorable line-readings.

What’s most interesting about the show, as I take another crack at my copy of the Bhagavad Gita (an ancient Hindu scripture concerned with religious duty and spiritual advancement), is that the characters’ daily lives are a textbook demonstration of the wrong way to go about accruing karma and achieving enlightenment. As Ranchor Prime notes in his commentary: “When the soul’s eternal love is directed towards the Lord’s creation instead of to the Lord himself it is transmuted into kama, or material desire. This kama, when frustrated, produces anger… So long as we are under the control of material desire we will have to gratify the demands of the mind and the senses, and we may feel some happiness in return. But the happiness is limited and temporary, and is the enemy of the true self because it leads to frustration… Thus, in the material world the living entity is bound by the golden shackles of kama, particularly in the form of sexual desire. No amount of gratification will satisfy kama, just as no amount of fuel added to a fire will extinguish it.” (p.35)

‘Jerry’ will never stop “dating” and settle down… and ‘George’ will never stop rooting around under the vending machine for lost change… they are damned and damaged souls. If one were feeling preachy, one might suggest that they’d been in a prison of sorts since the very first episode… and it’s only in the final episode that the walls and bars manifest, as they sit having the very same conversation they had in the pilot, caught in an endless loop of pettiness. “The Burning” is a particularly telling episode, as Elaine discovers that her boyfriend ‘David Puddy’ (played by the burly brickhouse of comedy that is Patrick Warburton) listens to Christian rock… and she becomes concerned that he might actually believe in something beyond the material, because she’d much rather assume he simply couldn’t be bothered to change the station:

Jerry: So you prefer dumb and lazy to religious?

Elaine: Dumb and lazy I understand. 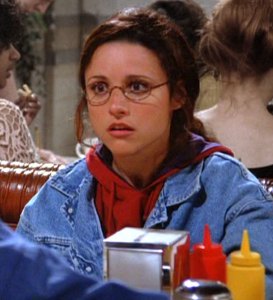 And that’s the problem I’m having in my own stumble towards “the light”. I have an inherent knee-jerk reaction where religion is concerned, after years of being bullied and demeaned by religious-types at school… or rather, by teachers and “friends” who packaged their bullying in piety. It’s easy to flick on the TV and see countless characters, real and fictional, encouraging us towards kama… with the boob jobs and the bling… but there aren’t really any role models to lead us down a more spiritual path. Well, there was John Locke for a little while, but other than that, I can’t think of anyone. Is it even possible to write an “enlightened” sitcom, without coming off like one of those creepy, preachy “Chick tracts”? That is, I think, the biggest hurdle that modern peeps face when contemplating a move towards more spiritual goals… the fear that they’ll become a judgemental nutjob. Of course, many would say that you’re a nutjob just for thinking there might be a God (or Gods) to begin with, so I guess it’s a sliding scale.