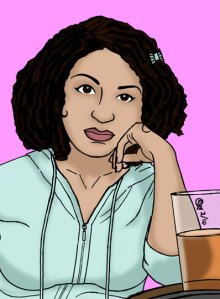 When Two Pints of Lager and a Packet of Crisps first started back in 2001, I couldn’t stand it. For one thing, it featured two refugees from Hollyoaks, which I already despised… and for another, the show was commissioned after its creator/head-writer Susan Nickson won a writing competition for which I was a shortlisted loser (apparently she’s about five years younger than me too, which doesn’t help). So there was a lot of negativity swirling around, which had absolutely nothing to do with the content or quality of the show itself. To pour even more salt in the wound, the BBC used a sample episode of Two Pints as the example you had to follow to format your script submissions to their house-style… and while my efforts were being rejected, Two Pints thundered on through eight series, comprising seventy-three episodes! Obviously that’s not so impressive by American standards, but for a Britcom that’s an enviable achievement. Although my snobbier friends still wouldn’t be caught dead watching it, I’ve warmed to the show over the intervening years… and when I saw a boxset of the first six series on sale for fourteen quid, I was powerless to resist.

Watching all those episodes in such quick succession probably isn’t the best way to experience them. For one thing, the soapy elements grate a little more than they might if there were a full year between the end-of-series cliff-hangers and their resolution… it was especially annoying to find a couple have a “pregnancy scare” at the end of one series, only to have the exact same dilemma palmed off on another couple at the start of the next series, like they were in some of melodrama relay race. Also, a number of jokes are repeated too often, and certain inconsistencies in character histories and behaviour crop up from time to time… but why quibble over petty things like that? This isn’t the sort of show you’re supposed to pick over and intellectualise… it’s the comedic equivalent of post-pub comfort food. It’s never going to win any fancy awards, or the approval of the Oxbridge set who usually dominate the BBC, but it’s oddly endearing in its brassy crassness… and for a first effort by an eighteen year old writer, it’s proven admirably robust.

Usually it’s pretty easy for me to single out a favourite character or cast member to draw, but Two Pints proved to be rather trickier in that regard… Sheridan Smith, Natalie Casey and Kathryn Drysdale all have their charms, and all put a great deal of energy and effort into keeping their characters credible, through all the bizarre and outlandish things that happen to them. Smith has probably been the breakout star of the series, going to on to appear in Nickson’s follow-up project Grown Ups, plus Love Soup (alongside Tamsin Greig), Benidorm, Jonathan Creek and the hugely popular Gavin & Stacey. She’s also picking up rave reviews for her turn as ‘Elle Woods’, in the West End production of Legally Blonde: the Musical. It’s really no surprise she’s so popular since, aside from being drop dead gorgeous, she also has incredible warmth and fine comic instincts. It’s a close contest between then two of them, but I’d say Casey seems to be having the most fun on-screen, and you can see her joy at delivering the jokes shining out of every pore. She is especially good at silent seething… although she’s also great at shouty rage too (and with meat-headed mechanic ‘Gaz’ (Will Mellor) as a love interest, she certainly has a great deal to shout about). She’s also very sincere in the sadder, more heartfelt scenes… it’s hard to really connect with the characters on an emotional level, because of the absurdity of the series overall, but there’s no doubting Casey’s commitment and dramatic chops. 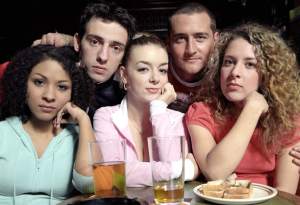 Drysdale is probably the more serious thesp of the three… she’s “classically trained”,  and apparently does a lot of proper theatre… but her character, Louise, is the craziest and most cartoonish of the bunch. One of the many things I disliked about Friends was watching ‘Phoebe’ (Lisa Kudrow) devolve from a touchy-feely, hippie-dippy character into quite a bitter and sadistic sniper… it always bugged me how none of the others seemed to notice how mean or rude or belligerent she was becoming, beneath the thin veneer of intermittent ditsiness. Louise, on the other hand, is a straight-up sociopath from day one, giggling with girlish glee at her friends’ misfortune, and constantly sneering down at them from her delusional diva’s pedestal. She scampers around in girly pink, bullying everyone in sight and squealing in spoilt frustration whenever anyone dares to defy her… which is quite often, because everyone seems to spot that she’s wrong in the head after only a few moments in her presence! Apparently the character is a bit of an albatross for Drysdale though… a quick Google search led me to a website for voiceover actors, where her entry goes to some pains to point out that she isn’t actually that squeaky in real life. Her role in St. Trinian’s, as lead “Chav” ‘Taylor’, didn’t do much to help her cause, as she was also quite abrasive… but she can be very mellifluous and mellow when she wants to be. Listening to the clips of her commercial work, it barely even sounded like the same woman!

Of course, I enjoy intelligent comedy… I appreciate insight and irony and wordplay and wit… but too often I find that snideness is mistaken for “intelligence”, as if it takes a genius to notice that life can be cruel and disappointing sometimes. Peep Show may be more critically acclaimed, but on the whole I find it too empty and mean-spirited to watch more than once… the writers actually made a meta-textual reference to their characters’ alleged “misanthropy” during the last series, but inevitably gave themselves the benefit of the doubt. In stark contrast, Two Pints has an infectious spirit, and I appreciate the way it celebrates the simple pleasures in life… boobs, beer, biscuits… “fags, shags, and kebabs”… all of which, sadly, are verboten for those of us on a more spiritual kick. Sigh. It may not be especially big or clever, but for my money, upbeat bawdiness is always preferable to bleak bombast.

4 Responses to Kathryn Drysdale as ‘Louise’