“Be who you are… Dress how you want… Just learn to run really fast.” 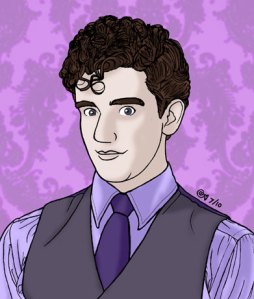 In honour of the fourth and final season of Ugly Betty (the trailers have just started running here, although I’ll have to wait until the 11th of August for the actual “premiere” of the first new episode), I’ve nominated ‘Marc St. James’ as the next subject for my self-absorbed psychobabble blog posts. Yay! Michael Urie was never meant to be a recurring cast member, but he had such good “chemistry” with Vanessa Williams in the pilot, that he was promptly signed up on a permanent basis… and thank goodness for that! I’ve voiced my opinion on the show plenty times before, but to reiterate, if it weren’t for Marc and ‘Amanda’, I probably wouldn’t have stuck around through the previous three seasons. And how sweet is it that those actors have become BFFs in real life? Sooo sweet.

I’ve just been reading about the eight broad personality types that Jung identified in his work. Of course real live human beings are a mixture of several different types, but I think fictional characters (especially comedy characters) are much easier to pin down and pigeonhole. Previous  blog subject ‘Sheldon Cooper’, for example, is a pretty classic Extroverted Thinking Type. Marc, on the other hand, is more of an Extroverted Feeling Type. To quote from the book: “They are conventional, outgoing people, close followers of fashion, and much concerned with personal success. They are tactful and charming, handling people well, and enjoy social gatherings and groups… on the negative side they can be rather shallow, insincere and posing, and in extreme cases may develop hysteria or mania.” (p. 100, Teach Yourself Jung) Interestingly, this makes him the “shadow”, or opposite, of one of my Types (Introverted Thinking), which is probably why I find him so intriguing, and why he sometimes pops up in my dreams. Jung felt that repressed, or neglected aspects of the psyche often invade our unconscious thoughts, to nudge us towards becoming a more balanced and whole individual. Although I’m really not sure how that really helps me in this case, seeing as how impossible it would be for me to be more like Marc in any practical way… however much I want to be.

It seems strange to me, frustrating and illogical even, that after all these centuries, and cycles of fashion, society at large (aka the dull, lumpen masses) still finds it hard to accept the sight of flamboyantly dressed men. A few months back a good friend of mine had a Stag Night, and (inspired by a very funny episode of Flight of the Conchords), insisted that we all dress as different versions of David Bowie, for our pub crawl around town. I cheated a bit, by claiming the pre-make-up, hippie-ish Bowie, which wasn’t really much of a stretch for me… all I had to do was shave off my beard, and throw on a flowery shirt. My fellow Stags put far more effort into their costumes, and the groom-to-be was rocking a very impressive Bowie-in-Labyrinth look, complete with wig and cane. Now, it was pretty obvious that we were all in fancy dress, even if you didn’t necessarily catch the Bowie reference… but I was amazed how many times random men would pass us in the street and call us “queers”. I’ve also attracted sarcastic wolf-whistles and rude comments in the past for having long hair… and it always makes me very self-conscious and angry. I don’t consciously strive to stand out from the crowd, but on the other hand I have an allergy to conformity… so I guess, it is my choice, but I don’t own that choice in the same way that, say, Goths and flamboyantly “fashionable” men do. More power to the peacocks!

While it’s true that no one ever became an Enlightened Soul by bleaching their teeth, and colour co-ordinating their closet, I could definitely do with a makeover. I place so much emphasis on the internal and esoteric, that I neglect every day and external things. I’m much “better” than I used to be, of course… much cleaner, all around… but I still can’t convince myself to think of clothes as a “treat”, rather than the tedious, money-draining necessity that my parents always used to pay for, while I saved up my pocket money for fun stuff. Boo to growing up! Somewhere, deep inside of me there is a Marc… and I like him… but he’s definitely not especially dominant. Of course, the Extroverted Sensation Type (aka ‘Daniel Meade’) is almost entirely AWOL… which may explain why I resent athletic Alpha Males so much, and tend to “project” those qualities on to female protagonists in my own writing. Maybe. I don’t know. You can’t become a PhD in Psychology just by reading one book, can you? But I’m having a lot of fun exploring these new ideas, and angles on life.

A comic book writer with an interest in feminism, philosophy, and affirmative action. He/him.
View all posts by Dee CrowSeer →
This entry was posted in Rants about Books, Rants about TV and tagged Enlightenment, Jung, Marc St James, Michael Urie, Teach Yourself Jung, Ugly Betty, Vanessa Williams. Bookmark the permalink.

2 Responses to “Be who you are… Dress how you want… Just learn to run really fast.”