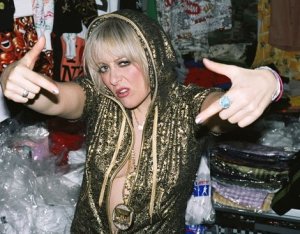 Oh dear, this is my second post in a week about spending money for the pleasure of a woman’s company… how worrying. I swear that’s not how I roll in real life! But Princess Superstar has just posted a sliding scale of donations you can make towards funding her next album release (The New Evolution), and what she’ll do in return to reward the donor. It’s not actually as dirty as it sounds. If I had a credit card, some disposable income and a second home in NYC, I would be bidding for…

But, alas, ’twas never meant to be…

A comic book writer with an interest in feminism, philosophy, and affirmative action. He/him.
View all posts by Dee CrowSeer →
This entry was posted in Rants about Music and tagged Princess Superstar, The New Evolution. Bookmark the permalink.
Loading Comments...