I actually traded in my previous copy of S.W.A.T. (2003) a year or so ago, because I had this crazy idea that I could slim down my DVD collection, and live an uncluttered, non-materialistic, meditative existence. Ho ho. Now that I’m back on an M-Rod kick, I saw a copy in the bargain bin at my local supermarket and justified the purchase to myself as “research”. I’d actually forgotten how much fun this DVD is… not just for the film itself, which is an entertaining, stylish shoot- ‘em-up, but for all the extras that they’ve loaded the disc with. Most “easter eggs” tend to be fairly blah oddments that aren’t worth the button-fiddling, but a lot of work must have gone into the hidden “Cast and Crew Golf Tournament” feature*, with its hilariously snarky commentary. It’s also kinda useful for wimpy writers like myself, who know nothing about guns, to have access to the “Sounds of S.W.A.T.” feature, where an armoury expert fires off various weapons at a shooting range, to show you how they work! Meanwhile, considering my previous, slightly random comment about wishing M-Rod had been cast in The Good Wife, I was amused to discover that Josh Charles, who plays the fancy-schmancy sharpshooter ‘T.J.’ here, went on to play ‘Will Gardner’, one of the partners at the law firm where all the “action” takes place in TGW.

Still, the real joy for me, as you might expect, was watching M-Rod do her turn as ‘Police Officer Third Grade Chris Sánchez’. It had actually been a while since I’d watched any of her work, so it was useful to refresh my memory over why she inspired me so much, back in the day. As soon as she appeared on screen, snarling up at Sam Jackson, it was professional-respect-at-first-sight all over again! It’s funny how they use the classic/cheesy “We’re here to meet a character with an ambiguously asexual name, and assuming they’re a man… but OMG! They’re really a woman!!” reveal for her, because it implies that either no one had bothered reading her file before deciding to recruit her to the team, or that somehow her file failed to mention her gender (or her height). Which seems unlikely, but never mind. 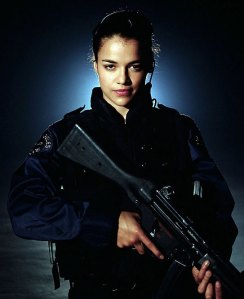 A friend of mine rather rudely dismisses M-Rod as “that woman who scowls all the time”… and it’s true that her characters tend to be put in fairly tense situations, so she doesn’t get a chance to show off her smile very often, but she also has a very dry, deadpan way of delivering her lines. I still think she’s very funny, even if she’s never done any straight-up comedy… her “tickles me” line in the S.W.A.T. trailer, which was sadly cut from the movie itself, always makes me laugh, no matter how many times I hear it. Her contributions to commentaries and “behind the scenes” stuff, also suggest she has a pretty good sense of humour when she’s off-duty and just kidding around on set… and it’s a shame she doesn’t get to show that side of herself on screen more often. She gets a few scenes with Colin Farrell that give her a chance to loosen up and let her hair down a little… but the demands of the plot quash them pretty quickly.

When I first watched S.W.A.T., it bugged me that her character gets sidelined so that Farrell can beat up his nemesis all by himself… but I’ve now come to understand that that’s a fairly standard movie convention… and even Jackson was absent from that prolonged fight scene, so I guess there’s no shame in it. The final shot of Sánchez staring down doubtfully at a photo of her daughter, kind of suggests that she might be considering leaving the team… or maybe she was just reminding herself why she fights so hard to keep the streets safe? I don’t know. And we haven’t had a sequel yet, despite the impressive financial success of this one, so maybe we’ll never know. (IMDb does have a listing for a forthcoming flick called S.W.A.T.: Fire Fight, but it doesn’t seem to feature any of the original cast, so it probably isn’t related).

* On the DVD go to the second page of the Special Features, select “6th Street Bridge”, then press right twice and down twice. This will highlight Mr Jacksons’s cap. Press “OK”… and enjoy!

A comic book writer with an interest in feminism, philosophy, and affirmative action. He/him.
View all posts by Dee CrowSeer →
This entry was posted in Rants about Films and tagged Chris Sánchez, Michelle Rodriguez, S.W.A.T., SWAT. Bookmark the permalink.