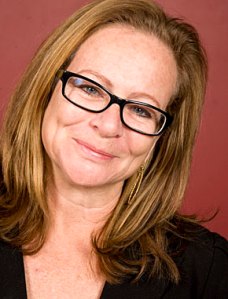 There’s a very sweet featurette on the Death Proof DVD, where QT pays tribute to his long-time editor Sally Menke, and refers to her explicitly as his “collaborator” in creating the final draft of all his movies. They’ve been working together ever since Reservoir Dogs (1992), and along the way she’s picked up two Oscar noms*, and presumably seen countless actors turn to the camera between takes to smile and wave “Hi Sally!” To plunder shamelessly from a piece Menke wrote last year for the Guardian: “I met Quentin when he was interviewing for an editor – a cheap one. I got in touch and he sent me this script for a thing called Reservoir Dogs and I just thought it was amazing. It floored me… I was hiking up in Canada on a remote mountain in Banff when I saw a phone box and I stopped to call LA and they confirmed I’d got the gig. I let out a yell that echoed around the mountain.”

As a QT-fanboy, it always annoys me when the haters grouch about him “ripping off” shots or images from previous movies, because I believe that’s missing the point… it’s not stealing, so much as sampling… or, as Menke puts it: “The thing with Tarantino is the mix-and-match. We do study other films and other scenes but only to get the vibe we need for our scene… Our style is to mimic, not homage, but it’s all about recontextualising the film language to make it fresh within the new genre.” Exactly!

I’m not normally so upset by the deaths of people I don’t personally know, but Menke spent the last two decades working almost exclusively on movies that I truly love, so it’s hard not to take it to heart. Especially when her death seems so inexplicable and unexpected. R.I.P.
———————————

A comic book writer with an interest in feminism, philosophy, and affirmative action.
View all posts by Dee CrowSeer →
This entry was posted in Rants about Films and tagged Death Proof, Inglourious Basterds, Pulp Fiction, Reservoir Dogs, Sally Menke. Bookmark the permalink.
%d bloggers like this: