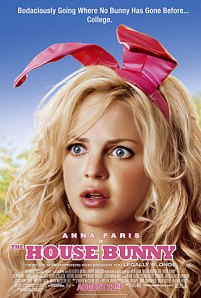 The cover of House Bunny (2008) proudly boasts that it comes “from the screenwriters who brought you Legally Blonde”… which is perfectly true, of course, but it’s not the whole truth. Legally Blonde (2001) was based on a previously published book (by Amanda Brown), much like many of Kirsten Smith and Karen McCullah Lutz’s other hits*. House Bunny is their first original screenplay (based on an idea by its star, Anna Faris), and I think the drop in quality is pretty apparent.

In other writers’ hands, the story of an unloved orphan girl who grows up desperately insecure, and could only find solace and sisterhood in the artificial bubble of a porn-barren’s harem, would be the stuff of tragedy… here, it’s played for light-hearted, light-headed laughs. The Playboy Mansion is portrayed as a Magical Kingdom for glamorous girlies, who dream of living in a PG-rated pool party paradise… rather than a place where models take their clothes off for money, and the pleasure of men. Whether or not that’s “empowering” for the women involved, I’m simply not qualified to say… but to fudge the facts so egregiously, in a film largely aimed at young girls, seems criminally irresponsible. It’s selling the perks of a “porn-chic” lifestyle, without even hinting at what the “catch” might be… kinda like those adverts for the Army, where everyone’s running around building bridges and nightclubbing, and no one gets clipped in the head by “friendly fire”. As if that weren’t bad enough, they then unleash this broken soul on a group of impressionable college students, and have her give them a slutty, soft-core makeover… oy!

Even if the plot and jokes were better, it would still be a reprehensible regression… but, as it is, the plot and jokes are terrible. In the making-of featurette, the film-makers seem convinced that they’re providing their viewers with a valuable moral lesson about being “the best version” of yourself that you can possibly be… to strive to be beautiful and brainy… to find the happy medium and have it all! But, that doesn’t actually come across very strongly in the movie itself, beyond some vague lip-service… kinda like the tiny “please drink responsibly” warning on adverts for alcohol. Maybe the costume changes speak to the characters’ evolution, but the walking-talking stuff certainly doesn’t. And Legally Blonde and Clueless have already covered the exact same ground far more seriously and successfully… while still being a billion times funnier, and more moving than House Bunny could ever hope to be. 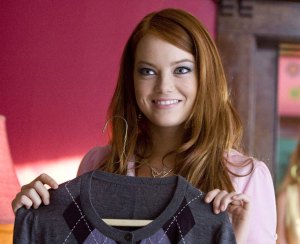 This movie is riddled with what I like to call “fokes”… i.e., faux-jokes… where characters say things which are phrased and delivered as if they were jokes, but actually contain no recognisable traces of humour. I did laugh a couple of times, I admit, but that’s more to do with the performances than the dialogue. Much has been written about the perpetually wasted potential of Faris, who is way too cute and way too funny to be doing the dross that she do… but Emma Stone still manages to steal a couple of scenes away from her. Unfortunately everyone else is playing such paper-thin, crudely sketched caricatures, it’s hard to tell whether they can act or not. For all I know Rumer Willis could be the next, er, Demi Moore… but it’s kinda hard to tell considering how little screen time she has. Katharine McPhee seems quite sweet, and at least she gets to sing over the end credits, so there’s something she can include on her showreel. Kat Dennings would probably be better off pretending the whole thing never happened, and skipping straight to clips from Nick and Nora instead.

Ah, now I’m starting to get bitchy… and we all know that the numbers don’t lie. Wikipedia lists the movie’s budget as $25 million (US), and its gross revenue as roughly $70 (US), which is a pretty serious chunk of change, whichever way you slice it. So, financially it was a “success”, and the cast seem to have had a super-fun time making it… but how do you calculate the artistic, moral and political losses?

3 Responses to The Tragic Kingdom