Carrie on Sexin’: Season One

Sex and the City was broadcast on HBO from 1998 until 2004, for a total of ninety-four episodes… but I lost interest somewhere between the fifth and sixth season, for reasons I can’t recall. Recently I managed to scrounge together a complete run of the show, and I will attempt to post reviews here on a season-by-season basis. Not proper reviews, of course, just my usual rambling nonsense.

First off, I think it’s worth taking a moment to prod at the basic premise of the show, and ponder why so many people find it offensive. The series was inspired by a collection of newspaper columns written by Candace Bushnell, which dealt with a wide variety of unconnected characters and their attendant sexual issues and misadventures. Since the show attempts to explore as many fresh sexual quirks and foibles as possible through its four main characters, they are required to work their way through an insanely high turnover of hook-ups! Risqué scenes are to this series what car stunts are to The Dukes of Hazzard, so every storyline, by and large, has to centre around the sexin’ promised in its title… whether that sex be good, bad, weird, or whatever. I do think that this is a fairly major flaw inherent to the premise, and to be honest I’d be just as happy watching this cast of characters in a less explicit sitcom, which spent more time observing them in their workplaces, and less time perving into their bedrooms (which would, at least, make it much easier to watch in a shared house with thin walls!). I think this is one of those cases where they’ve had to stay true to the initial concept of their show and brazen it out, long past the point of credulity.

From a spiritual perspective the show is rather toxic, of course… and I was surprised to discover that Carrie claims to have a “Zen teacher”! (ep 1.07) Apparently he taught her that happiness depends on living in the moment, and at the end of the episode she snarkily observes that this philosophy resulted in him dying “penniless and alone”… but that doesn’t necessarily mean that he was unhappy before he died, does it? Regardless, there’s no denying how the show obsessively fetishizes shiny material objects, when the camera isn’t swirling around glamorous bars and restaurants, or shoving itself up in the faces of “the beautiful people”. All of this should be very obnoxious and offensive to me, but I can’t help enjoying the aspirational fantasy elements, despite my better instincts. I just have to take a long, deep, cleansing breath after every episode and remind myself that it was all a dream… an impossible dream…

As for what makes the show work, well… first off they have a fantastic central cast, and I was impressed to revisit the pilot episode and find that everyone pretty much hit the ground running. It’s a little disconcerting to see Carrie with brown hair, rather than her trademark blonde curls, but other than that the characters are all totally recognisable… their voices are there, loud and clear, from the very first moment they open their mouths. Even (relatively) minor recurring characters like Stanford and Mr Big got their mojo working right from the off, which certainly helped to flesh out the fictional world our heroines inhabit. I rather like the way the early episodes wove random “vox-pops” in to punctuate the main story, but I can understand why they were phased out, as the regular characters’ lives grew more complex… they’re a neat stylistic quirk, but they’re also an unnecessary hassle, in terms of casting and location filming. Another element they ditched was Carrie’s rather annoying habit of breaking “the fourth wall” by looking directly into the camera and speaking to the audience, while the surrounding characters waited politely for her to return to their reality. 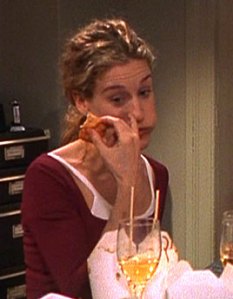 Despite this peculiar peccadillo, Ms. Bradshaw is an immensely endearing and engaging protagonist, thanks to a lively performance from the really rather lovely Sarah Jessica Parker. Although a lot of snarky types are quick to deride her appearance, I for one think she’s incredibly cute… and ridiculously sexy in her skimpy, skin-tight (and occasionally see-through) outfits. I’m so defensive about her features, in fact, it even bugged me when Carrie made fun of her own nose, during a discussion of plastic surgery (ep. 1.02). While her three co-stars bring a lot to the table, and the series really wouldn’t be the same without them, there’s no doubt in my mind (or my heart) that SJP is the star of the show. Besides effortlessly stealing any scene she’s in, she also has a fantastic chemistry with Chris Noth (Mr Big), which makes their scenes together a real joy to watch, whether they’re making up or breaking up (and, let’s be honest, they do plenty of both). As I said, it’s amazing to me how strong the spark between them is, from the very first moment they meet… and they have this fantastic way of silently mocking or mirroring the other’s facial expression, which adds a lot of charm and humour to their interactions, even when neither of them is actually speaking!

Besides Mr Big, the only other recurring “love interest” in this season is Skipper, a shy and supposedly sensitive computer-geek who latches on to Miranda. On paper, he should be my favourite character, since he’s the one closest to how I see myself… but unfortunately there’s something quite creepy and repellent about him. If you’ve seen the episode (1.09) where he immediately breaks up with a woman he’s “seeing” at the time, simply because Miranda has called him hoping for a hook-up, then you’ll know what I mean. I couldn’t bear to watch that scene again, so I did some tidying while it played in the background instead… even so, the dialogue will remain etched into my brain forever. Ick. Most of the other potential “suitors” (or conquests) in the show were rather unremarkable… but it was cool to see an early appearance by Justin Theroux (of Mulholland Drive and Charlie’s Angels: Full Throttle fame) as a sweary, best-selling author-du-jour who sets his sights on Carrie.

Another of the show’s strengths is the verve and wit of the dialogue, which appears in its most florid form via Carrie’s voiceover narration. Here’s a particularly striking example from the first episode, where she establishes the show’s signature take on modern relationships: “Welcome to the age of un-innocence. No one has breakfast at Tiffany’s, and no one has affairs to remember. Instead, we have breakfast at seven a.m., and affairs we try to forget as quickly as possible. Self-protection and closing the deal are paramount. Cupid has flown the co-op.” I can understand why some people might get turned off by that sort of wordplay, but I happen to be very partial to punnery, and am perhaps more forgiving of writerly excesses than other viewers might be.

As for the quality of the season overall… um… well, I’d say it was a short but very solid run of episodes, which confidently established the rhythms and patterns we’re all familiar with today. ‘Kay?

A comic book writer with an interest in feminism, philosophy, and affirmative action. He/him.
View all posts by Dee CrowSeer →
This entry was posted in Rants about TV and tagged Carrie Bradshaw, Chris Noth, Justin Theroux, Mr Big, Sarah Jessica Parker, Sex and the City. Bookmark the permalink.

3 Responses to Carrie on Sexin’: Season One