There’s so much going on in the third season of Sex and the City, that looking back it’s hard to believe it all happened in the same show! I mean that as a compliment though… they’re experimenting with the form a little, and exploring new (not always pleasant) sides of established characters. Heck, they even leave “The City” for an extended, two-episode-long “Isn’t California just the cuh-raziest place?” skit… so you can’t say they aren’t throwing any new flavours into the pot! The downside is that it’s a little patchier than previous seasons, but (by and large) the wheels stay firmly attached, and it’s a fun ride while it lasts.

First and foremost on the man front is Carrie’s latest recurring love interest, Aidan. As a youngling, I was a big Northern Exposure fan, and particularly admired John Corbett’s philosophising DJ, Chris-in-the-Morning. Back then I was just starting to discover The Beats, and Chris perfectly exemplified the sort of laid-back, “blue-collar” intellectual that my mind associated with that whole scene. He was pretty much the coolest character on TV at the time… and, quite possibly, of all time. So, it was great to see Corbett back again, playing such a decent, dependable and dashing dude. Obviously Carrie can be quite hyper-verbal, so by necessity her leading men tend towards the taciturn… but Corbett fills all of that silence with a fantastically physical, tactile performance, that easily establishes the strong connection between them, without any need for words. I don’t want to drop too many spoilers here (because I’m nice like that), but I think the most interesting aspect of their courtship is how it throws such a negative light on the series’ central protagonist. Up until now Carrie has been an adorable bundle of quirks and bon mots, who is constantly having her heart crushed by cold, unavailable men… now, with the tables turned, it’s her neurotic inability to embrace a relationship that “seems too good to be true”, that results in her royally screwing everything up. Somehow though, SJP manages to keep you hanging in there through it all, without ever really hating her character… even as you’re screaming at the TV set for her to come to her damn senses!

The other “significant other” introduced this season, is Charlotte’s timely “Prince Charming”, Trey MacDougal. Again, I was a big Twin Peaks fan back in the day, so Kyle MacLachlan was already a familiar, and fondly remembered face… although I never particularly warmed to his character here. If forced to choose one of the four SatC ladies to date, I think Charlotte would probably be top of my list. I know she’d never lower her (oh-so-snobby) standards far enough to willingly spend time with a penniless writer like me, so it’s more likely that I’d just be admiring her from afar… but I love that she’s so passionate and knowledgeable about Art… and I love that she’s so old school romantic (even if the premise of the show dictates that she be rather more promiscuous than her archetype might imply). I also very much enjoy Kristin Davis’s performance in the role, with her permanently perky energy, and “puppy dog” eyes… but I can’t help thinking that both she and Samantha have been consigned to the more cartoony end of the character spectrum. That’s not necessarily a bad thing, of course, because it helps balance out the bleaker heartbreaks that Carrie and Miranda experience/engineer… but it does mean that I’m a little less invested in their relationships, than I might be if they were treated more seriously. Not to say that Trey’s problems aren’t serious, but his character is such a cipher, and his lifestyle so unrelatable, that it’s hard to really sympathise when his bedroom woes came to light. 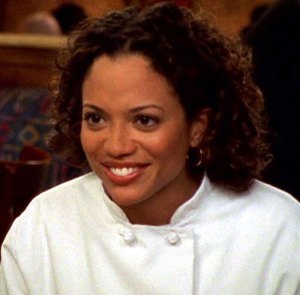 Going back to what I was saying in the previous post, this season finally saw one of the ladies hook up with a black man! (ep 3.05) Ironically, the relationship was then scuppered by the guy’s sister, who objected to him dating a white chick on principle. Gah! This struck me as defensive hand-washing on the part of the show’s writers… as if they were saying, “Look, we tried to introduce a non-white character… but those pesky minorities just won’t play ball! They’re the racist ones… not us!” Sigh. I wouldn’t mind so much, but the actress playing said sister (Sundra Oakley) gave such a great performance that I would have liked to see the story stretched out over a couple more episodes… and then maybe they could have made her motivations a little more ambiguous. I mean, it’s not as if Samantha is everyone’s idea of an ideal sister-in-law! But no, that was the last we saw of Oakley, who’s had a string of minor parts in various shows since, but didn’t score a major recurring role until she appeared as a contestant on the reality show Survivor in 2006. For shame, SatC, for shame! 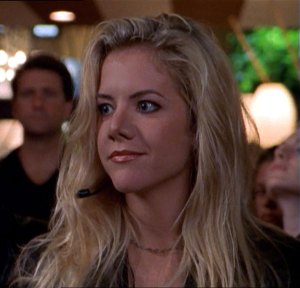 What with the Hollywood episodes (3.13/14), there were a ton of celebrity cameos this season… and it was great to see SJP share a scene with Sarah Michelle Gellar, however briefly. Her character repeatedly tells Carrie “I am you!”, which set me wondering why SMG hasn’t been given her own SatC-esque series yet. I think she’d make a fantastic rom-com lead… and it would be novel to see her have a relationship with someone who wasn’t a vampire and/or vampire hunter! Still, despite the presence of big names like Matthew McConaughey, Carrie Fisher and Vince Vaughn, the celeb-sighting that got me most excited was when I recognised Jennifer Elise Cox (of Brady Bunch Movie fame) playing the ‘P.R. Girl’ who berates Carrie for suggesting that “no one watches the movie” outside a fancy premiere. Cox is a very funny comic actress, and she wrings as many laughs out of the part as anyone possibly could, bless her. She also looks damn foxy, FYI. Back in New York, our heroines also encounter Kat Dennings (of 40-Year-Old Virgin fame) in her first ever screen role, swearing like a docker as the disturbingly precocious teen who hires Samantha to handle the publicity for her Bat Mitzvah. (ep 3.15) Sadly, Carrie doesn’t get to meet another one of Justin Theroux’s avatars this season, but she does spend two episodes (3.01/2) cosying up to John Slattery (of Mad Men fame), who I think bears a striking resemblance to JT, what with the thin pointy nose and “widow’s peak”. Curiouser and curiouser… 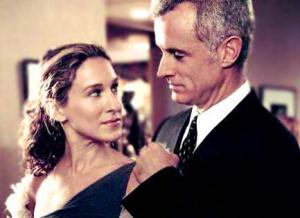 – I loved Cynthia Nixon’s dancing in the first episode. She’s got some cute moves!

– Carrie mentions using her oven for storage (ep 3.03), which came up on Judge Judy once too… is that something a lot of New Yorkers do? The case involved a defendant accidentally setting the plaintiff’s apartment on fire, because they hadn’t realised the oven was being used as a filing cabinet, and Judy laughed it off as a “cultural thing”. Hmmm…

– I lost a lot of respect for Steve when he announced how many women he’d slept with before Miranda (ep 3.06), and, for the record, would definitely classify him as a “slut”.

– What the hell was up with Trey’s cousin from Edinburgh? He sounded like he was just mumbling random gibberish, while affecting a broad “Scottish” accent. Couldn’t they have at least hired a real Scot for the role, rather some southern Sassenach?