Anita & Me II: The Crackering 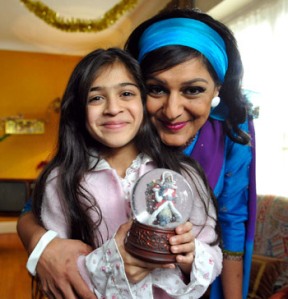 I can’t get any of the Sky channels, but if I could then I would definitely be asking my digibox pixies to record Little Crackers, a series of short, seasonal films in which the cream of British comedy present semi-autobiographical stories inspired by their own formative years, using child actors and some truly hideous period set design. Aside from the intriguing premise, there’s also an admirable number of female writer/actors involved, including Catherine Tate, Kathy Burke, Victoria Wood, Julia Davis and Jo Brand (whose “mini-me” will be played by none other than Dani Harmer!)

Meanwhile, Meera Syal will be returning to the creative well that gave us Anita & Me, by telling the story of how her seven year-old self coped with her Hindu parents’ reluctance to celebrate Christmas. There’s a short interview over at the Sky website, in which she explains: “I got the same actors from the film, Ayesha Dharker and Sanjeev Bhaskar, to play my parents again because this felt like bit of a continuation of the story in Anita and Me.” It probably doesn’t hurt that she also happens to be married to Bhaskar, and he’s old friends with Dharker… in fact, the two of them also appeared together as a couple in a recent BBC drama called The Indian Doctor. Young Meera will be played by a first-timer called Narisa Padhiar… who will probably be old enough to play the adult lead in one of my scripts by the time I actually sell one… sigh…

Apparently, Little Crackers will begin airing on Sky1 from 19 December 2010, and then on an irregular basis over the following week. Fun!