A Near Life Experience

Just Like Heaven (2005) was a terrible film for me to watch this week. Not that the film itself is terrible… in fact I thought it was a pitch perfect rom-com, with an incredibly moving supernatural mystery at its core… no, the reason why it was a terrible film for me is that it deals almost exclusively with the themes of loneliness, depression and self-imposed isolation. As I’ve mentioned before, a faulty broadband router is forcing me to confront the fact that I spend waaay too much time online, doing very little of any practical, life-enhancing value… and the rest of my time is spent either writing posts for this blog, or writing scripts. As Reese Witherspoon’s ghostly character looks back over the life she’s lost, all she can remember is working… and, likewise, all I can remember doing over the last couple of years is typing. At least she has the comfort of knowing that she’s a doctor who spent that time healing the sick… all I’ve been doing is crapping out rejected sitcom pilots! To some extent, stories where workaholics have an epiphany and come to appreciate The Important Things In Life™ can be very inspiring… but sometimes they can also be deeply dispiriting. I mean, sure, if I looked like Mark Ruffalo, lived in San Francisco, and had a sizeable private income, then I could happily go out every night and cruise the coffee shops of North Beach for cute arty chicks. But I’m not, and I don’t. I’m an ugly man with a clapped-out body and no financial prospects, living with his parents in a soulless armpit of a town. It’s all very well for The Universe to nudge me and say “Hey, your life’s out of balance… you’re letting your youth pass you by!”, but it’s rather like taunting a leg-less person with a fancy new pair of shoes. However much that person may want to wear the shoes, it ain’t never gonna happen… and maybe it would be better if everyone just accepts that fact, and shuts the f*ck up about the shoes already. ‘Kay? 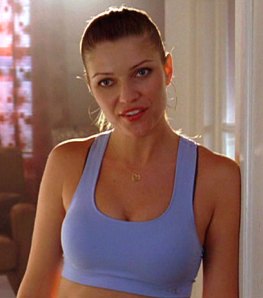 Ah well, back to my pathetic and pointless obsessing over attractive actresses: Witherspoon is her usual adorable self, and effortlessly brings the funny, along with the weepy. Dang, I love a woman with expressive eyebrows… and hers are probably the hardest workings brows in Hollywood right now! Bless ’em. By a wacky coincidence, this film also features Ivana Milicevic as a ridiculously hot neighbour who hits on Ruffalo’s character… and I’ve had a crush on her ever since I saw the 2001 rom-com Head Over Heels on a plane journey to San Francisco! Despite the terror I always feel when I visit British cities like London, I have very pleasant memories of my time in SF. Obviously I was only there as a tourist, so I’m bound to see it through rainbow-tinted glasses… but by and large, it just seemed like a pretty awesome place to live. If someone could guarantee that Milicevic would be living in the apartment next to mine, I might even consider moving there!

A comic book writer with an interest in feminism, philosophy, and affirmative action.
View all posts by Dee CrowSeer →
This entry was posted in Rants about Films and tagged Elizabeth Masterson, Ivana Milicevic, Just Like Heaven, Katrina, Reese Witherspoon, San Francisco. Bookmark the permalink.

5 Responses to A Near Life Experience