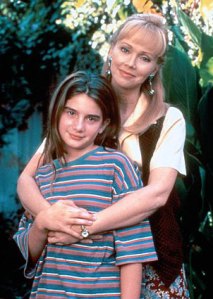 Last Sunday Ch5 were showing Freaky Friday… no, not the original version, starring Jodie Foster and Barbara Harris (1976)… and not the gritty reboot starring Lindsay Lohan and Jamie Lee Curtis (2003)! No, this was the bargain-basement TV-movie, starring Gaby Hoffmann and Shelley Long (1995), which many (myself included) consider to be the runt of the litter. In theory, the story of a feuding mother and daughter magically switching bodies and being slapped in the face with a short, sharp lesson in empathy should deliver a decent emotional payoff, regardless of how many wacky water-skiing stunts (or blistering guitar solos) you can afford to throw into the finale. But this take on the tale didn’t squeeze a single tear out of me, and I think that has a lot to do with the way the characters behaved once they’d switched lives.

Obviously they’re supposed to flounder a little as they adjust to their new roles and responsibilities, thus generating the requisite “fish out of water” hilarity… but what happens here when the mother’s spirit transfers to her daughter’s body, is that she becomes an imbecile with the short-term memory of a brain-damaged goldfish! She doesn’t seem to make the slightest effort to try to fit in at school or perform a passable impersonation of her daughter… preferring to smugly show off in Spanish class, call teachers by their first names, and compulsively suck cigarette smoke into her 13-year-old lungs, for no good reason! I mean, yes, I get that it’s supposed to be “funny”… but it’s also totally stupid. She doesn’t behave like an intelligent and capable businesswoman adapting to strange new circumstances… she behaves like an arrogant alien with only the vaguest conception of how human children function. It’s easier to forgive the daughter’s ridiculous behaviour once she finds herself saddled with a fiancé she despises and a Very Important Business Meeting she hasn’t had the slightest preparation for… but her scenes also suffer in comparison to the later remake, which seemed to have a much sharper sense of how a teenager would react to being suddenly “saddled” with a saggy old body (no offence intended) and boring grown-up job. 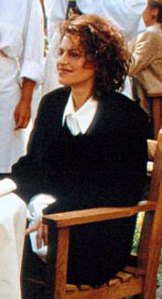 My main motivation for sitting through this dreck was that the mother’s Very Important Business Meeting was with a big time fashion retailer played by Sandra Bernhard. Unfortunately, her character is written as a totally generic “deus ex machina” type… starting off all gruff and unresponsive, until she experiences an unconvincing change-of-heart in the third act, and impulsively hands the mother a big, fat juicy contract simply because she finds the woman’s “youthful spirit” endearing (even though she seemed to find it intensely irritating only a few hours earlier). Tch! Bernhard doesn’t even get any particularly funny lines… and there’s a really weird moment where she’s listening to the daughter’s sales pitch, then gets distracted by a gaggle of nearby waiters bitching about what a shitty tipper she is (which really makes no sense at all, unless they were deliberately trying to guilt her into giving better tips?). She does look rather fabulous in her super-sharp pantsuit though, so I guess it wasn’t a total waste of time. Besides Long, Hoffmann and Bernhard, the film features supporting turns by Eileen Brennan, Carol Kane (as identical twin sisters, in a gag that doesn’t work), Drew Carey and Alan Rosenberg (of ‘Ira’ in Cybill fame)… all of whom are vastly overqualified and poorly served by the script. Meanwhile, Hoffmann’s schoolmates are played by a number of future-hotties, including Marla Sokoloff (as a Queen Bee, who also undergoes an inexplicable third act epiphany), Reagan Gomez-Preston, Natanya Ross and Ashlee Turner.