Seeing Sarah Shahi in Supernatural a few weeks ago, and then ranting about how underrated Life was, reminded me that I hadn’t actually seen all of the second season (for reasons I’ll come to later), so I borrowed the boxset from my sister and set those discs spinning! For those who aren’t familiar with the series, Life (2007-2009) was an American crime drama, starring Damian Lewis as ‘Charlie Crews’, an LAPD detective newly released from prison, where he served twelve long, lonely years for a crime he didn’t commit. While locked away he took a keen interest in Zen Buddhism to help keep himself sane, and also developed a fixation with fresh fruit (which was apparently unavailable in “the big house”). Along with a truckload of money (over fifty million dollars, in fact) his legal settlement allowed him to return to work and continue investigating self-contained mystery-of-the-week murders, while secretly unravelling the conspiracy which led to his conviction, in his off-duty hours. Shahi played his partner-in-crime-solving, ‘Dt. Dani Reese’… who started off quite prickly and suspicious of Crews, but eventually bonded with him enough for their bickering to become friendly banter.

Although I’m very fond of the series, I think I can see why it wasn’t a soaraway success. Life seemed to be a show divided against itself… on the one hand, you had the often rather silly and nonsensical weekly murders, which brought out the goofy, playful side of Crews… then on the other hand, you had the deadly serious revenge arc, which brought out his darker, brooding side. At times it felt like a mash-up between Pushing Daisies and 24! I can see how that might leave an audience feeling very confused… or even frustrated, as they found themselves favouring one hand over the other. With the addition of Donal Logue as the detectives’ new commanding officer, ‘Cpt. Kevin Tidwell’, the writers also introduced a rom-com element, and I became far more interested in his hesitant, faltering attempts to woo the ridiculously hot Reese than I was in Crews’ game of Connect-the-Conspiracy-Dots. I understand that the frame-up was necessary to set the show’s premise in motion… but maybe it would have been better if they’d concocted a less lingering and convoluted catalyst for his conversion to Buddhism? Because that was always the show’s Unique Selling Point for me, and I love the way that the writers scattered little nuggets of esoteric wisdom throughout his dialogue. Apparently someone’s already written a movie called Zen Noir (which was also the theme of an amusing piece of flash fiction Chuck Lorre posted in one of his Big Bang Theory vanity cards), and I wish it was an actual genre that more writers worked in.

Another factor working against the success of the second season was Shahi’s pregnancy. I hesitate to mention this, because it makes me sound like a baby-hating meanie… but when Shahi’s bump started showing, her character was shunted off into a subplot about interviewing for a job with the FBI, so she could spend all of her scenes sitting down, hiding her belly behind a desk… or standing in a park, being filmed from the shoulders up, and talking to Crews on her cell phone. Not only did this seriously hinder the bickering buddy-cop dynamic that the series was built around, it also kneecapped the budding romance between her and Tidwell. Boo! To be fair to the writers though, they did have the decency to wrap the season up with a kick-ass finale, which provided a very satisfying emotional payoff, while still leaving enough plot threads dangling to draw you back for the third instalment. Is it too late to start sending Tibetan Mourning Flags to NBC in protest against the show’s cancellation? Probably, yes.

Meanwhile, the individual episodes featured some great actresses in supporting roles: First up was Kim Director (of Blair Witch sequel fame), as ‘Cheryl Price’, the grieving widow of a murder victim (ep 2.1). I don’t want to spoil the “gag”, but fans of hers might want to check out the brief scene revealing what her character gets up to in her office after hours… ‘cuz it’s kinda kinky. In ep 2.3, Marguerite Moreau (of Wet Hot American Summer fame) appears as ‘Betsy Bournes’, an animal rights activist who may know more about the murder of a pharmaceutical scientist’s death than she’s letting on. In ep 2.6 Christina Hendricks returns in her semi-recurring role as ‘Olivia Canton’, a gorgeous young woman who is planning to marry Crews’ father (a cantankerous old git, who really doesn’t deserve her). I’m trying not to write anything too lascivious about Hendricks, but… y’know… that woman really is pure sex. And it’s not just what she’s got going on below the neckline… her character here is so sweet and kind and tender… I’m genuinely surprised she doesn’t have the entire male population of L.A. following her around all day, slowly dying of thirst because they’re drooling so much. Oy!

In ep 2.11, Rachel Miner plays ‘Squeaky Uhry’, the co-owner of a morbid museum dedicated to serial killers, who basically behaves like the Paris Hilton of mass murder fandom. Apparently Miner appeared in later episodes of Supernatural, as a reincarnation of the brothers’ first major female nemesis, ‘Meg’… but of more interest to me is her role as Carrie’s young admirer ‘Laurel’, in the second season of Sex and the City. In ep 2.14, Angela Goethals appears as ‘Patty York’, a cute redheaded rock chick obsessed with the lead singer of a defunct “hair metal” band… who becomes a murder suspect when tragedy befalls the band’s number one tribute act. Goethals’ first starring role came in the sitcom Phenom (1993–1994), a one-season wonder about a young tennis player, and her arrogant, obsessive coach. I remember really liking that show, back in the day… but can’t recall anything too specific about it, beyond the fact that her character’s older brother (Todd Louiso) was very funny. Ep 2.15 saw the first appearance of Helen McCrory (of Charles II fame) as ‘Amanda Puryer’, a femme fatale in the employ of a man Crews suspects of framing him. Apparently McCrory and Lewis are married in real life, so I imagine it was fun for them to square off against each other on-screen. Presumably, they also saved a little money on petrol by car-pooling? The same episode also saw the introduction of Amanda Fuller as ‘Ann Earley’, the estranged daughter of Crews’ ex-con housemate and financial advisor, ‘Ted Earley’ (Adam Arkin). I didn’t recognise her at the time, but apparently Fuller appeared in Buffy the Vampire Slayer as ‘Eve’, the short-lived Potential Slayer with a southern accent. 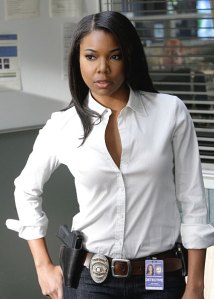 In ep 2.16, Sarayu Rao plays ‘Deepa’, a tech support assistant sat in a call centre (which may or not be located in India), who has to deal with Crews wittering on at her while he tries to fix his blue-tooth set-up and solve a murder. Oddly enough, I’d just seen her the other day in the first season of The Big Bang Theory, playing ‘Lalita Gupta’, a woman who agreed to go on an arranged date with Raj to make their meddling parents happy. One of the main suspects in ep 2.16 is played by an actress named Allison McAtee, who gives such an assured, charismatic and sexy performance in the sizeable role, I was surprised to check her IMDb page and find it (relatively) barren. In ep 2.18, Gabrielle Union makes her debut as ‘Jane Seever’, aka The Substitute Reese. Her character, an ambitious overachiever with a “fifteen year plan” to become mayor, provided an interesting contrast to Crews, and Union was a very welcome addition to the cast… but that doesn’t change the fact that she’s a sub. Previously, Union appeared in Ugly Betty as ‘Renee Slater’, Wilhelmina’s younger sister… as well as classic teen comedies Bring It On (2000), 10 Things I Hate About You (1999) and She’s All That (1999). In ep 2.19, Linda Park appears as ‘Asst. Coroner Debbie Quo’, who comes under suspicion when a colleague of hers gets demoted from Coroner to corpse. Parks is probably best known for playing ‘Hoshi Sato’ in the Star Trek prequel series Enterprise (2001-2005), and I thought she was great here, but sadly it wasn’t a recurring role, what with the show getting canned and all.

4 Responses to To Life!