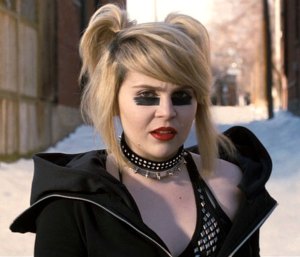 Now that I’ve watched Scott Pilgrim Vs. The World (2010) through a couple more times*, I’ve come to the conclusion that my favourite character after ‘Knives’ is probably Ramona’s fourth Evil Ex, ‘Roxanne “Roxy” Richter’, as portrayed by Mae Whitman. For one thing, I really love her look… especially her hair and the war-paint stripes on her face… and for another, it’s awesome to see such a cute actress being so totally badass. Aside from her incredibly impressive fight moves, she also gets some great zingers to spit out at Scott… I don’t want to spoil them here, but her deliver is hilarious. Oddly, Roxy is the only Evil Ex who seems genuinely pissed off about being dumped… and you can kind of sympathise with her when Ramona blithely dismisses their time together as a misguided “phase”. Tch! Apparently in the original comic books her name is spelt “Roxie”, and she’s depicted as an accomplished fine artist who has an inferiority complex over her (lack of) height, and the fact she’s only a “half-ninja”. Bless. Any chance of a spin-off movie for her? No? Alrighty. I wasn’t familiar with Whitman before this, although she apparently appeared as one of Michael Cera’s girlfriends in Arrested Development… which, as a newly minted Cera fan, I really should watch sometime. She’s also done a shedload of voice-overs, for animated projects as diverse as Tinker Bell, Family Guy, Avatar: The Last Airbender, American Dragon, Johnny Bravo and Duckman! 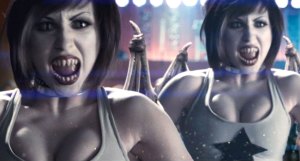 I also have to give a shout-out to Christine Watson who plays the four ‘Demon Hipster Chicks’ who back-up up Evil Ex No. 1, ‘Matthew Patel’. According to Edgar Wright’s commentary tracks (yes, that’s plural), she had an incredibly hard time of it (“the hardest day of the shoot” are his exact words), suspended up in a fork rig for thirteen hours, with full contact lenses and fangs in, having to dance to the same damn song forty times in a row! When you watch it carefully, you can see that each Demon Chick is making a slightly different expression at various moments… so it isn’t just the same take replicated four times over. Watson doesn’t really get a lot of screen time in the finished piece, but I hope she feels it was worth all the discomfort… I mean, she’s definitely an eye-catching character, and at least with the DVD people can rewatch that scene and appreciate her moves a little more. Needless to say, in real life she’s a very pretty lady… and an excellent dancer.

* For the commentary tracks, ‘cuz I’m nerdy like that… so a big “bless you” to Anna Kendrick who admitted to being an avid listener herself, and lambasted the commenters on other movies who mock our kind. Swoon!