The Gals of Gold Lick 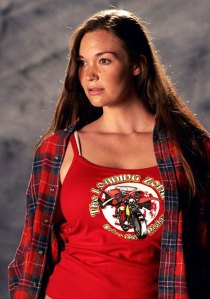 Back in my student days I was a big Bruce Campbell fanboy. I guess it all started when a friend made me watch Evil Dead one afternoon, but I much preferred the less gory Raimi flicks, like Crimewave and Army of Darkness. It was always fun seeing Campbell crop up in cameo roles here and there, but even better to see him score leading roles in shows like The Adventures of Brisco County Jr., which I first saw at a sci-fi convention on imported VHS! Ah, kids today don’t know how easy they have it, with their internets and their YouTubes! What I liked most about Campbell was his manic, cartoonish energy, combined with an admirable ability to make even the cheesiest B-Movie dialogue sound kinda cool. In my limited experience, I’d also say he’s very good to his fans, because I once wrote to the makers of Brisco County to say how much I enjoyed the show, and in return I was sent a signed photograph of Campbell in costume, with a little personal message on the back encouraging me to “keep studying”. Bless.

My man-crush on Campbell has waned somewhat over the intervening years, but when I saw a copy of My Name Is Bruce (2007) going cheap in a charity shop, I had to pick it up and give it a spin. For those who don’t know, Campbell produced, directed, and starred in this comedy-horror flick about a washed-up B-Movie actor (called “Bruce Campbell”!) who is recruited by an obsessive fan to rid his hometown of a rampaging Chinese vengeance sprit, named ‘Guan-di’. To be brutally honest the plot is pretty thin, with a jokey meta-twist where the ending should be… and some of the gags are pretty corny and half-baked… but I laughed a lot more than I thought I would, and there was enough quirky charm on display to keep things trucking along. As far as the sub-genre of self-referential comedy-horror flicks goes, I’d have to say it comes a poor second to Seed of Chucky… but it also had a much smaller budget, so what do you expect? And it’s still a pretty essential purchase for Campbell cultists, since he was so involved in the production… even arranging for the “back lot” set to be built on his own property, to save them the hassle of having to find (and close-off) an existing location!

While many of the cast members are old friends of Campbell’s (most notably Ted Raimi, who pops up as three very different, mildly offensive stereotypes), a number of pivotal roles were also given to actors recruited from around the Oregon area, with nary an IMDb credit to their names! The most prominent of these, for reasons I shouldn’t have to go into (but probably will), was Grace Thorsen, who played ‘Kelly Graham’, single-mother of the aforementioned fan, and smokin’ hot love interest of our eponymous hero. It’s not an especially complex part, and the tone of the whole production is too silly to really require much in the way of serious acting, but I thought she acquitted herself well, considering her relative lack of experience in front of the camera. She seemed to be having fun at least… and that’s always appreciated in a movie like this! Since Bruce was released, Thorsen has gone on to appear in a baseball comedy called Calvin Marshall (2009), co-starring Steve Zahn (of Out of Sight fame), but that would appear to be it, as far as movie productions go. Presumably she’s returned to thesping it up on stage instead? Shame. I also really enjoyed Janelle Farber’s scenes as ‘Kasey’, the stripper who’s hired by Bruce’s agent as a birthday present. She didn’t actually do any stripping, of course, but she did get a few funny lines, and she brought a lot of charm and energy to the role. I’d happily cast her in a larger part, if I were in a position to do so… but, sadly, nobody else has (so far). I guess that’s the downside of not living in Hollywood, where the movie-makers and shakers are?

A comic book writer with an interest in feminism, philosophy, and affirmative action.
View all posts by Dee CrowSeer →
This entry was posted in Rants about Films and tagged Grace Thorsen, Janelle Farber, Kasey, Kelly Graham, My Name Is Bruce. Bookmark the permalink.

2 Responses to The Gals of Gold Lick