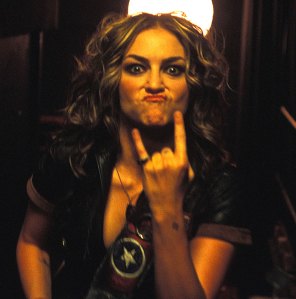 Oh dear… I headed up to the nearest big town to blow some b-day money in the second-hand shops, and ended up hauling home a stack of DVDs that will probably take me ‘till August to work through! In my defence though, it averaged out at something like £1-60 per disc, so how could I resist? One of the most bizarre bargains I picked up was a “press pack” review copy of Prey For Rock & Roll (2003), which came packaged along with a CD-Rom of stills from the movie and advertising graphics. I’d seen the film before and… well, frankly it was a bit too heavy for me. I’m not really a “drama” buff at the best of times, and when it seems like the tragedies are being piled on, one after the other, with hardly any room to breathe in-between, I start to get fatigued. But there’s nothing cooler/sexier than seeing women rocking out, and when the “rock chicks” in question happen to be Gina Gershon (of Bound fame), Drea de Matteo (of The Sopranos fame), and Lori Petty (of League of Their Own fame), then I really couldn’t help going back for a second viewing. For those who don’t know, Prey follows the story of ‘Jacki’ (Gershon), the leader singer of an all-girl punk-rock band called “Clam Dandy”, who is on the verge of turning 40, and starting to feel the years of fruitless struggle in obscurity weighing down on her. There are moments of levity along the way, and the Variety review even went so far as to call it “upbeat”, but personally I find it a bit of a slog. On the plus side, the performances are good, and the characters are engaging, and the musical numbers are awesome… and any movie that inspires girls to pick up guitars and drumsticks is always going to get a thumbs-up from me. But enough of my yacking, let’s see some more pictures of my favourite Dandy: 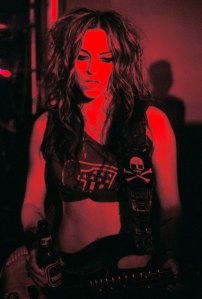 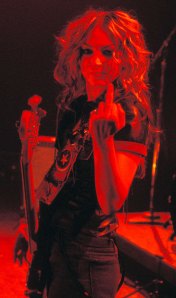 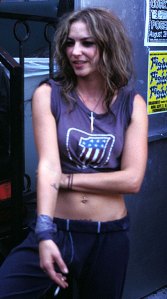 A comic book writer with an interest in feminism, philosophy, and affirmative action. He/him.
View all posts by Dee CrowSeer →
This entry was posted in Rants about Films, Rants about Music and tagged Drea de Matteo, Gina Gershon, Lori Petty, Prey For Rock & Roll, Punkiness, Tracy. Bookmark the permalink.

2 Responses to Drea For Rock & Roll