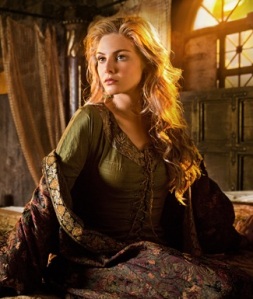 Ch4 are showing the season premiere of Camelot tonight… from the reviews I’ve skimmed, it doesn’t exactly sound like the show hits the ground running… but considering the setting and the cast and the costumes, the D&D geek in me is still quite looking forward to it. Our main “person of interest” here would be the gorgeous Tamsin Egerton (of St. Trinian’s fame), who plays the legendary ‘Guinevere’, and seems quite excited about the whole project, as far as I can tell from this revealing interview with USA Weekend… she also comes across as quite the trouper, considering what she had to put up with (and take off) for her first scene of the shoot! I’ll say no more, for fear of leading web-searchers astray… but it’s an interesting read.

Update (12/6/11): I’ve just watched the first two episodes, and thoroughly enjoyed them. Not much of Egerton yet, but obviously her character is going to become more central to the story later on (the next episode is even named after her!). I’ve always had a bit of a “grudge” against Eva Green, because I hated The Dreamers so much… but she’s all kinds of awesome here… and she looks damn fine in a velvet gown, and fur collared cloak (she looks pretty good out of them too, of course). But when did Claire Forlani get old enough to be the mother of adult offspring? I guess time marches on for all of us… except Merlin, obviously.

A comic book writer with an interest in feminism, philosophy, and affirmative action. He/him.
View all posts by Dee CrowSeer →
This entry was posted in Rants about TV and tagged Camelot, Claire Forlani, Eva Green, Guinevere, Tamsin Egerton. Bookmark the permalink.