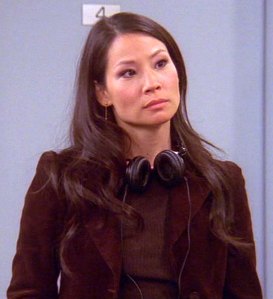 Clearly I have an addiction to buying bargain DVDs. Even with a teetering tower of cases already threatening to spill over and cause me a mild, toe-related injury, I still couldn’t resist picking up the first season of Joey (2004-2006), when I saw it on sale for £2-50. Having watched the whole box-set now, I have to say that isn’t anywhere near as awful as I expected it to be! For those who don’t know, this series picks up where Friends left off, with Matt LeBlanc reprising his role as ‘Joey Tribbiani’, a struggling actor, womaniser and food lover (not necessarily in that order), who has moved to L.A. to further his career. I think the biggest problem with this premise is that it lacks a unique “sitcom” setting, or compelling concept at its core. When Frasier Crane was shipped off to Seattle, he was gifted with a new workplace and career as a radio therapist… but for the first half of this season, all Joey does is sit in his apartment complex’s hot-tub playing with toy soldiers, and half-heartedly drag himself to the occasional audition. Ironically (?), a much better format for a spin-off might have been something like LeBlanc’s latest vehicle, Episodes, which is a “workplace” comedy based around the creation and production of a TV sitcom. Admittedly shows like that tend to focus more on the creative team, but at least it would have given the eponymous character a reason to get out of bed in the morning… something which seems to be sadly lacking here. When he finally does get something resembling a regular gig in ep. # 12, it’s too little, too late… because there clearly wasn’t enough money available in the budget to make that show-within-a-show seem even vaguely tangible or plausible.

Obviously our main “person of interest” here is Drea de Matteo (or Prey For Rock & Roll fame), who plays Joey’s older sister ‘Gina Tribbiani’. As you may be able to tell from the photograph, she isn’t shy about showing her cleavage… or even inviting her own brother to feel her new surgically-enhanced boobs! Ew? Actually incest is kind of a running theme in the show, with regular jokes about her inappropriate behaviour towards her geeky student son (played by Paulo Costanzo, of Gypsy 83 fame), such as breast-feeding him until he was seven, and sharing a rose-petal-scattered bed with him at a B&B. She also kisses Joey full on the lips at one point to help him defuse his overt sexual attraction to the (overage) actress who will be playing his daughter in a TV show, because the breathy, flirty tone of their audition was creeping everyone out! The weird vibe between Gina and her son isn’t helped by the fact that in reality de Matteo is only six years older than Costanzo… I mean, I know her character was supposed to have been a young mother, but that’s unpossible! Despite all that creepy stuff, Gina is probably my favourite character in the show… she’s brassy and ballsy, drinks fortified wine and listens to Whitesnake! I love her accent too. I don’t know why, but I’ve always found New York accents kinda sexy… and the broader they are, the sexier they are! I think de Matteo is probably better suited to more dramatic roles, because the cartoony overacting this show requires doesn’t really do her any favours as an actress, but she clearly threw herself into the role, and it’s always fun watching her work. Oh, and she gets her very own “And…” in the credits, in recognition of how awesome she is… so, yay!

The second biggest female name on the bill is Jennifer Coolidge, playing Joey’s agent ‘Bobbie Morganstern’. It’s only a semi-regular role, but she’s hilarious when she is on-screen… and I think the show-runners realised how great she was as they were going along, because she gets out and about a lot more towards the end of the season. Once again she’s cast as an unrepentant “cougar”, and once again I can’t help envying the young man she sets her sights on (in this case, it’s Michael). Third up, we have Andrea Anders as ‘Alexis Garrett’, Joey’s next door neighbour, landlord and friend. Frankly, I found her character to be rather poorly thought out… I mean, in the first episode she claims to be a corporate lawyer, but she apparently has enough free time to moonlight as the apartment complex’s “super”, and hang around with the other characters whenever they need a fourth wheel. I’ll admit I’ve never actually met a corporate lawyer, but she comes off as far too goofy and insecure for me to buy her as a high-powered career gal. I do think Anders is a very funny performer, I just don’t think the writers were especially committed to backing her up on the whole “lawyer” thing. Her character is also an odd variation on the “unobtainable love-interest” trope, since the major hurdle keeping her from dating Joey is her husband! That’s right, in the first half of the season Joey has two major crushes, and they’re both married women! Kinda hard to root for him as a romantic lead, when he keeps trying to lure women into committing adultery with him… tch!

Now on to some of my fave guest stars: In ep. #1.3, Joey throws a housewarming party, and his nephew invites a classmate named ‘Seth’, played by a typecast Simon Helberg (of Big Bang Theory fame). Seth’s date for the party is played by Jayma Mays, in her first ever screen role! She’s probably better known now as the OCD-afflicted guidance counsellor ‘Emma Pillsbury’ in Glee, but also appeared in Ugly Betty as Betty’s romantic love-rival ‘Charlie’. Booo! She gets a few funny lines here, and looks adorably wide-eyed… gorgeous hair too… so basically everything you’ve come to know and love about her was already there from the get-go. In ep. #1.10, Mindy Sterling (of Austin Powers trilogy fame) plays ‘The Casting Director’, who eventually casts Joey in an exciting new drama series called “Deep Powder”. The executive producer of the show, ‘Lauren Beck’, is introduced in ep. #1.12, and played by the legend that is Lucy Liu. Hurrah! Obviously Liu and LeBlanc had previously appeared together in the Charlie’s Angels flicks, so they already had good, comedic chemistry… and I’d say their scenes here are probably the funniest in the whole season… especially when Coolidge gets in on the action too. In my alternate-universe version of the show, Liu would have been playing the hard-headed glamazon and unobtainable love-interest from the very first episode… rather than just burning through a whole “I hate you… now I love you!” arc in just three episodes! Seems like such a wasted opportunity… but I don’t know if Liu was even available to sign on for a full season in the first place, so there’s no point me griping now.

In ep. #1.19, Christina Ricci sashays in to steal the show as Joey’s spoiled and snobbish younger sister ‘Mary Teresa’. While I can’t help pining for the plumper Ricci who used to appear in “edgy” indie comedies like The Opposite of Sex and Buffalo 66, I also can’t deny that she’s very funny and winning here. Meanwhile, in the same episode, Michael repeatedly fails to pick up on the flirtatious signals he’s being sent by a girl who delivers his aquarium supplies, played by Rachel Blanchard. Although probably best known for playing ‘Cher Horowitz’ in the TV version of Clueless, I like to think of her as either ‘Nancy’, the cute hippie-chick from Peep Show, or as ‘Sally’ in Flight of the Conchords (aka “The Most Beautiful Girl in the Room”). Another potential love-interest for Joey crops up in ep. #1.20, in the form of a cool, feisty photographer played by Mädchen Amick. Although her most recent gig was a role in the critically-derided vampire-apocalypse movie Priest, Amick already earned herself a “lifetime pass” as ‘Shelly Johnson’ in Twin Peaks (and Twin Peaks: Fire Walk with Me)… a role that David Lynch and Mark Frost created especially for her, because they were so impressed with her audition! And she’s fantastic here too… funny, but also very low-key… very natural. Again, it’s a shame her character arc had to be so condensed, because she would have made another great long-term foil for Joey, and a good grounding influence to keep the show from going too over-the-top goofy. In ep. #1.23 Michael gets a much, much older girlfriend, whose more age-appropriate daughter was played by Jenna Dewan… who I’ll always remember fondly as “the girl who drank too much milk” in The Grudge 2. Love that scene.

The second season has never been released in this country, which is a bit of a shame because I know that Adam Goldberg appears in a couple of episodes as Michael’s estranged father, and I’d love to see him sharing some scenes with de Matteo. Meanwhile, here are some bonus screen-caps of Gina… because I really want to believe that what it says on her T-shirt is true: 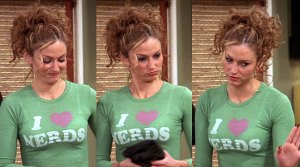 5 Responses to The Trouble With Tribbianis