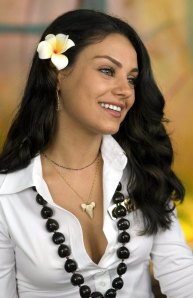 Annoyingly, I’d just bought Forgetting Sarah Marshall (2008) in a sale, when ITV2 decided to repeat it… but the DVD does include an extended version, and bonus features, so I can’t really complain. For those who don’t know, this rom-com centres around a character named ‘Peter Bretter’, who composes the uniformly “ominous” score for a hacky TV detective show starring his long-term girlfriend, ‘Sarah Marshall’. When the self-involved actress dumps him for another man, he falls into a downward spiral of depressing one-night stands, but his friends eventually talk him into taking a holiday to cheer himself up. Unfortunately he chooses a resort hotel in Hawaii that his ex used to talk about all the time, and consequently ends up sharing several awkward encounters with her and the super-sexy English rock star she left him for. Oh no! Luckily, he finds an ally in the hotel’s comely concierge, and a faltering new romance beckons. Hurrah!

Obviously, my main person-of-interest here was Mila Kunis, who is described as “illegally adorable” on the DVD commentary track… and there’s plenty evidence of that here, with her winning performance as the sympathetic-but-feisty object of Peter’s affections, and some very funny scenes between the two of them. I can totally understand why men would want to jump off cliffs, or risk a beating from an ex-boyfriend to impress her… and I assume that’s why such dangerous doses of cuteness have been outlawed in so many countries and states. Meanwhile, Kristen Bell has to play it a lot straighter and bitchier, as the eponymous actress. I wasn’t very familiar with Bell’s work before this, but spotted almost immediately that she is also very attractive… and there’s a joke on the commentary track about the fact that these two women would only ever fight over a schlub like Jason Segel in a fictional movie. Harsh! Frankly I found Sarah a rather despicable character… particularly when she implied that Peter spending an entire week wearing jogging pants (!) was somehow a relationship crime equal to (or worse than) her sleeping with another man on the sly… so it was difficult to see her as anything other than an annoying impediment to Peter’s progress. No offence. 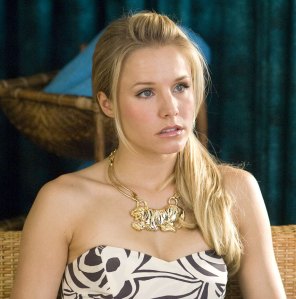 As for the rest of the cast, June Diane Raphael (of Bride Wars fame) appeared as a random rebound hook-up that Peter woos in a bar, with such suave and sophisticated lines as “I find you very sexually attractive… I think that having sex with you would be a great treat for me.” How could she resist? Kristen Wiig (of Bridesmaids fame) had a very funny cameo as a hands-on yoga instructor… but only in the extended version, apparently. I thought that Bill Hader and Liz Cackowski made a very sweet and chuckle-worthy couple, even if the DIY “green screen” effect that Hader’s character uses during his web-chats with Peter were clearly impossible. I was less amused by the plight of the Jack McBrayer/Maria Thayer pairing, although they’re both fine actors, and I admire their bravery in baring all for the sake of a fairly inconsequential subplot.

Overall, I thought the jokes were a little scattershot, but they did have a very high hit ratio… and Segel makes for a pretty adorable, and identifiable lead… so, I’m definitely glad I got around to checking this movie out eventually.

[Note: I’ve seen exactly two movies about Hawaii (this one and Blue Crush), and both of them featured a scene where a male tourist was beaten up by the jealous ex-boyfriend of a local girl he’s romancing! Is the Hawaiian tourist board trying to tell us something? Hmmm…]