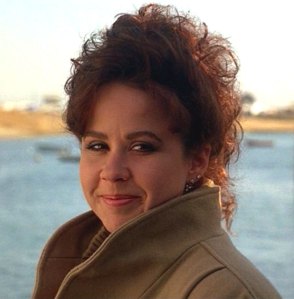 By and large, I prefer horror flicks that are spooky, rather than just icky… so I had to look away from the screen a couple of times while watching Witchcraft (1988), even though I know in my conscious mind that it’s all just flesh-coloured rubber and stage blood (or possibly ketchup, in this case). Apparently this movie goes by other names in other countries, including “La Casa 4” and “Witchery”… and because this is the censored UK cut, there’s more nudity in the international trailer that’s included on the DVD, than in the actual movie itself!

Most of the action takes place around a haunted hotel located on a tiny island off the coast of Massachusetts. In the opening scene, we see a flashback (?) to a pregnant woman running into the hotel, while being chased by evil pitchfork-carrying men dressed in old-timey clothing… but since the hotel looks like a relatively recent structure, I wasn’t sure if this was an anachronistic goof, or if these people were supposed to be ghosts who haunted the island. Then it’s revealed that this scene was just a nightmare that Linda Blair’s character (‘Jane’) was having… and since she’s then shown to be several months pregnant, it’s pretty obvious that this dream should be taken as a bad omen. Then, we cut back to the island in the “modern day” to meet an academically-inclined young woman who has dragged her boyfriend ‘Gary’ along, while she investigates a mysterious phenomenon known as “The Witch’s Light”. She’s too busy translating an obscure German text on the subject to pay much attention to the sex-hungry Gary (played by David Hasselhoff), who has gamely agreed to take photographs of the dreary rock for her. Meanwhile, back on the mainland, Jane’s middle-aged mummy and daddy are arranging to buy up the island and renovate the resort, with the help of a perky blonde architect, and a goofy real estate agent… and they decide to take their knocked-up daughter and her little brother along for the ride, just for the hell of it. No rational explanation is given for why Jane’s supposed sibling is about twenty years younger than her… I guess they just wanted to have a moppet in the mix, but didn’t want him to be her son for some reason? I dunno. Once they all reach the island, a creepy “Lady in Black” who’d been visiting them in visions since they set-off, sucks her unwary guests into a hellish torture dungeon one-by-one, via a pulsating red vortex that looks remarkably like the opening credit sequence to the old Doctor Who series. Eep!

The ‘Lady in Black’ is played by a German actress and chanteuse named Hildegard Knef. I hadn’t heard of her before, but apparently she warrants a “special appearance” credit… and I have to say, she’s definitely one of the more convincing and engaging actors in the cast. It seems mean of me to pick on the others, but I honestly couldn’t tell if the young boy was supposed to have some sort of mental impairment, or if he was just a terrible, terrible actor. And the woman who plays Gary’s bookworm girlfriend delivers all of her lines in a flat, droning monotone, regardless of whether she’s rebuffing flirty advances, discussing her precious text translation, or recoiling in terror from unimaginable horrors! I’m not surprised to see that this was only her second (and thankfully final) foray into feature films. Blair gives a decent performance, but doesn’t really have much to work with, in terms of her character… I mean, she’s pregnant, and she loves her little brother, but that’s basically all we ever learn about her. SPOILER: The poor woman gets possessed in the finale of the flick, and has to lip-synch along to Knef’s line-readings… which makes for an amusing bit of business, but is a little too similar to The Exorcist to really inspire much more than deja vu. Still, at least it gives her an excuse to shrug off the huge shoulder-pads she’d been sporting in some of the earlier scenes. Sure, she’d look adorable whatever she was wearing, but that really wasn’t a flattering look for her… or any woman ever, in fact. Oh, and her mother is played by Annie Ross, who (like Knef) is also known to do a bit of singing on the side. Besides overdubbing Britt Ekland in The Wicker Man, Ross has also appeared in Superman III, Throw Momma from the Train, Pump Up the Volume, and Short Cuts. She gives a strong performance here, as a rather miserly matriarch… although I think The Lady in Black was being a bit hasty when she tortured the woman to death for committing the sin of “Greed”, when all she was trying to do was start a new business and keep an eye on her overheads! Tch!

Despite the inherent yuck-factor (which I’m still getting over, a few hours later), I probably got more laughs out of this than Epic Movie and Just My Luck combined! It’s a sad day indeed when a low-budget horror flick stuffed with absurd situations, lame dialogue and ridiculous reactions, actually makes for a better “comedy” than a couple of the glossier intentional entries in that genre.