I’m not really the target market for mid-afternoon made-for-TV melodramas, but when I saw Ana Ortiz name-checked in the listing for Little Girl Lost: The Delimar Vera Story (2008), I felt compelled to set my recorder. For those who don’t know, this fact-based flick stars Judy Reyes as ‘Luz Cuevas’, a minimum-wage mother who refuses to believe that her newborn baby was vaporised in a house fire, insisting that her daughter was snatched during the chaos, by persons unknown. Unfortunately she doesn’t have a scrap of evidence to back-up her theory… until six years later, when she happens to bump into a tenuously-related woman who was at the ill-fated party, and is now introducing a suspiciously familiar little girl as her own daughter. Dun-dun-dunnn! As is the case with a lot of true stories, it all seems a little too far-fetched to swallow as fiction… and I was a little annoyed by a scene where she takes a hair she’s plucked from the poor girl’s head to a police station, and begs for the woman at the front desk to run a DNA test on it, without ever actually explaining who the hair came from, or how it’s connected to a crime they might be willing to investigate. I mean, I’m assuming that the real Cuevas contacted the police more often than the fictional version does, and was repeatedly rebuffed… but since we never really see her report it as a kidnapping on-screen, it’s a little harder to feel outraged that the cops didn’t investigate her case until she got a local politico involved. 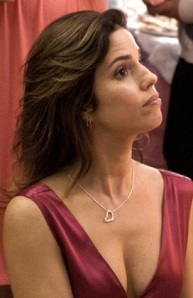 I was never a big fan of Scrubs, despite the impressive cast list and sexy guest stars… I was just never comfortable with the clash of wacky, fourth-wall-breaking surrealism and maudlin schmaltz. That said, Reyes impressed me greatly here, with her heartbreaking performance…. I mean, her character’s more of a one-note ideal, than a flesh-and-blood person, but she plays it very well. Meanwhile, Ortiz appears as the alleged kidnapper, who comes off as quite sweet and friendly on the surface, although it’s pretty apparent from her first appearance (where she cons Cuevas’s husband out of a free brake-check for her car) that she’s not quite as trustworthy as she seems. For the most part Ortiz is playing a slightly sneakier variation of ‘Hilda’ from Ugly Betty… and we spend the majority of the movie’s running time with Reyes, so there isn’t much room left for her to really sink her teeth into the “villain” role… but she’s convincing enough in the few scenes she does get to herself, and it’s easy to believe that the other characters would be so dazzled by her warm smile and chirpy demeanour, that they’d never suspected her of such infamy.