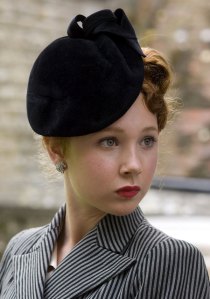 Weighty period dramas aren’t really my idea of fun… but Juno Temple is… so when I saw a copy of Atonement (2007) going cheap a few weeks ago, I decided to pick it up and give it a spin. I will often put off watching something I know is going to be very sad and serious until I’m in the right mood for it… but I was feeling rather bleak in the wake of a recent script rejection, so I thought it might help to put on a weepy and have a bit of a wallow. In fact it proved to be the perfect prescription, as the consequences of the main character’s own post-related haste were far more horrifying than my own! I don’t want to go into any plot details, because I think it’s best to go in “blind” with a film like this (as I did), and let it all unfold before you… that way, it’s all the more engaging and nerve-wracking, since the narrative doesn’t fit a conventional formula, and you can never be quite sure what’s going to happen from one scene to the next! All I can say is that everyone involved in the production did brilliant work, and the finished product definitely deserved all of the critical acclaim (and shiny trophies) it received. I was especially glad to see the score get some love, because the use of a typewriter as a percussive instrument was pure genius!

I don’t know which film Temple actually completed first, but it must have been quite strange for her to go from this to a wacky romp like St Trinian’s (or vice versa), considering what her character is put through here. Her early scenes with Saoirse Ronan were very amusing… their little exchange over who should take the lead role in the latter’s play was very nicely performed, I thought… and her later, more dramatic scenes were also very powerful. True, she doesn’t get a great deal of screen-time, but she certainly makes an impression… and carries off the curly-red-hair look rather well too. Hurrah!

A comic book writer with an interest in feminism, philosophy, and affirmative action. He/him.
View all posts by Dee CrowSeer →
This entry was posted in Rants about Films and tagged Atonement, Juno Temple, Lola Quincey, Saoirse Ronan. Bookmark the permalink.