A few weeks ago I was saying how turned off I was by the later seasons of Will & Grace… but when a stack of season six box-sets appeared on sale in a local remaindered bookshop, I couldn’t resist picking one up out of curiosity. Mostly I was suckered in by the list of “guest stars” promised on the back of the box… who do very little to distract viewers’ attention away from the fact that Debra Messing was heavily pregnant during the latter half of the season, and confined to a lying or sitting position for several episodes (when she wasn’t absent entirely). It’s particularly disorienting if you watch all the episodes back to back over the course of a week, since she starts off flaunting her svelte figure in a ridiculously revealing gown cut halfway down to her navel, and then a few “days” later she’s trying to hide her bulging belly under baggy blouses and throw-pillows! Personally, I think she looks great with the extra weight… although it does mean that Messing can’t be quite as manic as she was in previous seasons. Thankfully Megan Mullally is there to pick up the slack, dispensing catty criticisms, sapphic come-ons and shrill bursts of song, like so many under-the-counter prescriptions. Bless her. Now, bring on the laundry list…

In ep #6.2, Mira Sorvino (of Romy and Michele’s High School Reunion fame) appears as ‘Diane’, an ex-girlfriend of Grace’s husband, ‘Leo’ (Harry Connick Jr.), and the unwitting target of Karen’s tipsy flirtation. Ep #6.3 sees the return of the ridiculously pretty Blythe Danner, in her recurring role as Will’s mom, ‘Marilyn Truman’. She appears in a total of four episodes this season, and aces every one of them, bless her! Most people probably know this already, but I only recently learned that in real life Danner is mother to the-also-very-pretty Gwyneth Paltrow (of being adorable in Glee fame) and Jake Paltrow (of The Good Night infamy). Emily Rutherfurd appears in ep #6.4 as ‘Joanne’, an eager student in Jack’s acting class. She’s probably better known now for playing ‘Christine Hunter’ (aka “New Christine”), in The New Adventures of Old Christine, but apparently she also played ‘Sally’ in the original pilot of the American remake of Coupling! This episode also featured a mostly silent appearance by Susan Leslie, as a woman working out at Grace’s gym (‘Carol’). Aside from minor roles in sitcoms such as Scrubs, Joey and Seinfeld, Leslie also served as script co-ordinator on NewsRadio and The Larry Sanders Show. 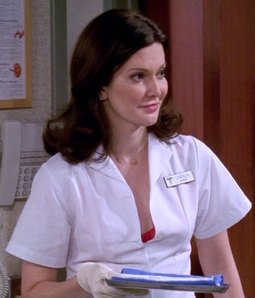 In ep #6.7, Karen subjects herself to a physical from ‘Dr. Isaac Hershberg’ (Jack Black), assisted by ‘Nurse Sheila’, an occasional recurring character played by Laura Kightlinger, who also worked as a writer and consulting producer on W&G! After making brief cameos in various other shows, Kightlinger finally got a shot at a starring role in The Minor Accomplishments of Jackie Woodman, which she also created, wrote and executive produced… it wasn’t a success, but I’d still be curious to see it, because I always thought she was funny whenever she popped up in this show. Meanwhile, ‘Eva’ (the Head Nurse) was played by Stephanie Faracy, who once played Amanda’s adoptive mother, ‘Rosemary Tanen’, in Ugly Betty. In ep #6.9, a needy Will finds himself being wooed by a randy restaurant patron, played by Kali Rocha. Despite the fact I’ve watched the Buffy box-sets to death, I didn’t realise that ‘Cecily’, the society lady “William the Bloody” attempts to court with his soppy poetry, was actually Anya’s “vengeance demon” gal-pal ‘Halfrek’ in disguise! Either way, Rocha’s very funny in both shows, and looks fantastic here in a slinky cocktail dress.

Sara Gilbert (of Roseanne and Big Bang Theory fame) cameos in ep #6.10 as ‘Cheryl’, the world’s number one “Fanilow”, who covets Will’s place at the front of a queue for Barry Manilow tickets. All she really does here is sit and snark, but that gal sure gives good “surly geek”! Ep #6.11 sees the return of the marvellous Minnie Driver (of Knowing Me, Knowing You fame) as Lorraine Finster, and also an appearance by Geena Davis (of A League of Their Own fame) as Grace’s flaky older sister ‘Janet Adler’. Meanwhile, Will’s love-struck secretary is played by Kari Lizer, creator and executive producer of Old Christine… who also served as a co-executive producer, consulting producer and writer on W&G. Dang, this show had a lot of talented women working on it! Tracey Ullman pops up in ep #6.14 as a cooking class instructor who grows weary of Will’s whining, while this episode also saw the final TV performance of the late Suzanne Pleshette, who played Karen’s estranged con-artist mother ‘Lois Whitley’.

In ep #6.15, Eileen Brennan (of Clue fame) returns as Jack’s acting coach, ‘Zandra’, who becomes an innocent pawn in Will and Grace’s plan to reinvent themselves as apartment “flippers”… a plan which is quickly curtailed in ep #6.17, when they find themselves locking horns with a couple of “power lesbians”, played by Edie Falco (of Sopranos fame) and a very cute Chloë Sevigny (of Party Monster fame). Bebe Neuwirth appears as ‘Herself’ in ep #6.19, showing off her “pins” and commiserating with Karen and Jack over the cancellation of Frasier.  In ep #6.20, Karen informs Jack that she’ll have a lot less free time to “play” with him after her upcoming wedding, so he decides to “recast” her, and eventually offers the role to an eager young hopeful named ‘Phyllis’ (aka “Dickie Anginson”), played by Amy Farrington. Aside from minor roles in various dramas and sitcoms, including Old Christine, Just Shoot Me! and Malcolm in the Middle, Farrington also had a starring role in the short-lived Michael Richards Show. She only gets one-and-a-half scenes here, but I think she’s uber-adorable. 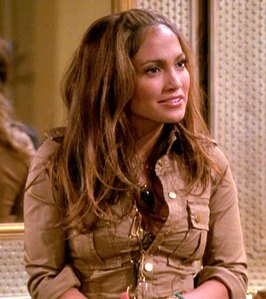 Ep #6.21 sees the return of Lesley Ann Warren (another Clue cast member) as ‘Tina’, the over-excitable mistress of Will’s father, who enlists our hero’s help in uncovering the identity of the other “other woman” the adulterous patriarch might be cheating on her with! Meanwhile, Jack’s son attempts to win a place on his school’s cheer squad, supposedly in a bid to impress the head cheerleader, played by Sara Paxton (of Aquamarine fame). Finally (phew!), the double-length season finale features Jennifer Lopez as ‘Herself’, in a relatively self-deprecating cameo… even if the big joke-at-her-expense seems to be that she works too darn hard. Still, it’s refreshing to have a pop star on the show who already has the requisite comic acting chops!

2 Responses to No Messin’