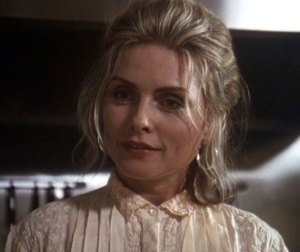 One of the movies that motivated my purchase of the boxset that also included Witchcraft and Revelation, was the horror anthology Tales from the Darkside (1990). I remembered watching it on VHS, back in my student days, and really enjoying the first story… but had somehow managed to conflate the rest of it with John Carpenter’s Body Bags, which I must have seen around the same time. Silly old man!

Anyhoo, the whole thing kicks off when a glamorous suburban housewife, played by Deborah “Debbie” Harry (of Hairspray and Blondie fame), returns to her house to begin preparing dinner. I hate to ruin the gag, but it’s quickly revealed that the recipe she’s following requires her to gut and roast a paperboy she’s been fattening up in a cage adjoining her kitchen. Eep! In a move straight out of the Arabian Nights play book, the terrified moppet starts to tell her a series of fantastical stories, to delay the inevitable. These framing scenes are quite cartoony and amusing in themselves, although I have to say the kid seems a little more natural on screen than Harry does. She’s probably a better singer than him though, so I guess it evens out. 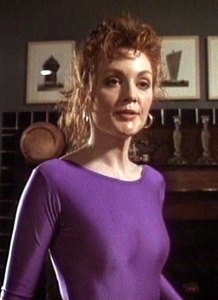 It’s pretty obvious why the first story stuck in my memory the longest: “Lot 249” finds a gawky graduate student played by Steve Buscemi (of Living in Oblivion fame) reanimating an ancient mummy in order to take revenge on the preppy d-bag who cheated him out of a scholarship. The douche’s best bud, and theoretical “hero” of the tale, is played by Christian Slater (of Heathers fame), while his girlfriend and co-conspirator is played by Julianne Moore! Of course, Moore has since gone on to earn plenty plaudits for her work in serious dramas such as Short Cuts, Boogie Nights and The Kids Are All Right… but I’ll always think of her as ‘Maude Lebowski’ in The Big Lebowski. Apparently she also has/had a recurring role in 30 Rock, which I look forward to checking out when I get around to buying the next season. Oh, and away from acting she’s written a children’s book based on her own experiences, called Freckleface Strawberry… a title that derives from a nickname the other kids used to taunt her with, in the playground. Harsh. She really throws herself into the part here, and seems to be having fun with it… and [SPOILER!!!] it’s probably the only time you’re ever going to see her wearing zombie make-up, so it’s worth checking out for that novelty alone. 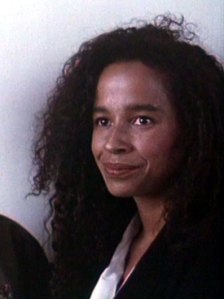 The second story, “Cat From Hell”, was adapted from a Stephen King short story by George A. Romero (pedigree!), and involves a wealthy old man hiring a hitman to kill a black cat, which he believes is a vengeful spirit sent to torture him! It’s probably the funniest of the three, but it doesn’t feature any major (living) female characters, so let’s skip ahead to the third segment, shall we? “Lover’s Vow” begins with a despondent artist witnessing a gruesome murder committed by a gargoyle-like monster, who spares his life after he swears to never speak of what he saw or heard to another living soul. Shortly thereafter he meets a beautiful woman named ‘Carola’, and they promptly start dating… so the rest of the story basically builds the tension around his artistic compulsion to express himself, and his desire to be totally honest with his new partner, despite the threat to his life that a full confession may initiate. Carola is played by Rae Dawn Chong, who I wasn’t familiar with before, but apparently she’s the daughter of Tommy “Cheech and” Chong, and has appeared in numerous full-length features, including Quest For Fire, The Color Purple and Crying Freeman. Here she plays a rather underwritten “dream girl”, and doesn’t get much to do besides look gorgeous, smile fondly, and frown with concern… all of which she does very well.

A comic book writer with an interest in feminism, philosophy, and affirmative action. He/him.
View all posts by Dee CrowSeer →
This entry was posted in Rants about Films and tagged Debbie Harry, Deborah Harry, Julianne Moore, Rae Dawn Chong, Tales from the Darkside. Bookmark the permalink.
Loading Comments...