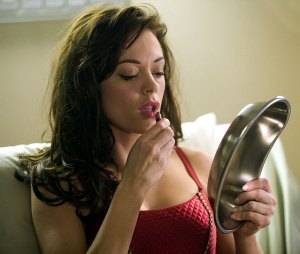 [Salvaged version of a very old blog post… not that it matters, just sayin’]

When a film-buff friend of mine first explained the Grindhouse concept to me, I was dead-set against it. Why bother putting so much effort into making films look crappy, when there are already plenty of people doing that with such effortless grace? The idea of sitting through two faux-retro flicks, and a bushel of fake trailers, didn’t appeal to me in the slightest, so I thought no more about the project… until the decision was made to split the films for their UK release and I warmed to the idea of sitting alone in the dark with Rose McGowan and Marley Shelton.

As far as the performances in Planet Terror (2007) go, I wasn’t disappointed. I’d assumed that the Grindhouse conceit meant that the acting and FX would be as flawed as the film-stock it was supposedly shot on. Not so. The story is clearly set in the present day, and none of the performances were as wooden as I expected them to be… which again makes the whole “Oooh, look at the scratches!!!” fakery rather baffling to me. Never mind. McGowan is such an endearing actress, with such a natural knack for comedy, it pains me to think of all the years she wasted working on Charmed, when she should have been waltzing her way to becoming the greatest indie rom-com lead the universe has ever known… the Goth Julia Roberts! Is that a compliment? I meant it that way, honest! Shelton gets a couple of great lines, and some very funny scenes too… assuming you have a suitably warped sense of humour. There’s also a “female empowerment” thread running through their stories, that I found oddly uplifting. 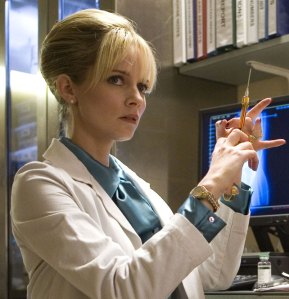 I’ve never been a big fan of goopy gore, and the virus that infected the locals in this “zombie” movie was particularly repellent. Somehow I managed to avoid bringing up my dinner, but the squeamish should probably keep a spare bucket handy! The action scenes grew more absurd as the story unwound, and shoot-outs are really where R-Rod comes into his own. If it hadn’t been such a prominent part of their promotional campaign, the revelation that McGowan’s character (‘Cherry’) wears a machine gun like a peg-leg would be a serious spoiler, because when she finally straps that heater on the whole flick kicks up a gear. In an alternate universe, she’d have her own franchise… a gorgeous, monster-hunting go-go dancer with a grenade launcher for a leg! What’s not to love?

Overall, I thoroughly enjoyed this movie… when I wasn’t covering my eyes and feeling icky… but I’ve found in the past that R-Rod, much like Baz Luhrmann, makes films which I can only love once. The first time around it’s all thrills and chuckles, but the second time around they’re as flat as last month’s cola. I don’t know if that’s something to do with watching them on a smaller screen, or if they simply don’t have enough steak beneath the sizzle to make for a decent meal the next day. Anyhoo, I’d definitely recommend this film as a rental, if you have a strong stomach and a fondness for really, really, really crazy shoot-out stunts. Or if you just want to see R-Rod homage Tarantino’s Kill Bill and marvel at the audacity!

A comic book writer with an interest in feminism, philosophy, and affirmative action. He/him.
View all posts by Dee CrowSeer →
This entry was posted in Rants about Films and tagged Marley Shelton, Planet Terror, Rose McGowan. Bookmark the permalink.