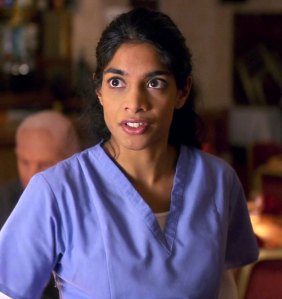 Seems like everyone I know is a fan of Doctor Who, but I’ve never really seen the appeal, myself. I vaguely recall watching Sylvester McCoy’s run, back in the day, but since then I hadn’t seen an episode all the way through… until last night, that is! My apathy towards the show was no match for my desire to see Amara Karan acting on-screen again.

For those who don’t know, ep #6.11 (aka “The God Complex”) finds ‘The Doctor’ and his Assistants appearing in a cheesy 1980s-style hotel, where every room is a customised cell of despair, designed to prey on the fears of any individual who is foolish enough to enter. Our heroes quickly team up with a small band of random survivors, which includes a Muslim medical student named ‘Rita’, played by Karan (was her character name a deliberate reference to The Darjeeling Limited, or just a wacky coinkydink?). I thought she gave a good performance in the part, and brought an interesting, intelligent energy to the character. At one point the Doctor jokingly offers her the job of Assistant… which would have presented me with quite a dilemma. On the one hand, I’d love to see Karan get a high profile gig on such a beloved show… but on the other hand, it would have meant that I’d have had to keep watching the damn thing until her character either died or retired. Thankfully she didn’t take him up on the offer, so that’s all beside the point. Does my opinion on the episode count for anything? Probably not, considering I’ve already outed myself as a total ignoramus… but I thought it was genuinely creepy in places, and I appreciate that the emotional scenes between the main cast were well played, even if they meant nothing to me. Overall it was fairly entertaining, but hasn’t made a convert of me.

[Fun fact: Apparently “Vworp! Vworp!” is the official spelling for the noise the TARDIS makes when it appears and disappears]

A comic book writer with an interest in feminism, philosophy, and affirmative action. He/him.
View all posts by Dee CrowSeer →
This entry was posted in Rants about TV and tagged Amara Karan, Doctor Who, Dr. Who, The God Complex. Bookmark the permalink.