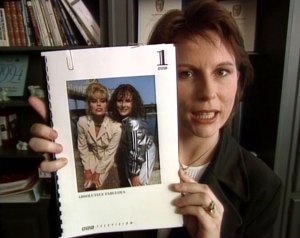 I decided to take a break from Absolutely Fabulous before tackling the final disc in my boxset, assuming that I’d be able to get another sizeable post out of all the “behind the scenes” material promised by the back cover blurb… but in the end it turned out to be very weak sauce indeed.

“How To Be Absolutely Fabulous” (1995) is a half-hour clips show, aimed at the American market, punctuated by mildly amusing straight-to-camera pieces with Jennifer Saunders mucking around in her office at BBC HQ, and some very brief interview snippets with assorted production staff… while “Absolutely Fabulous: A Life” (1998) is a feature length clips show, punctuated by mildly amusing skits with Saunders and June Whitfield mucking around in character, in the charity shop where Eddy’s Mother volunteers. Although their combined running time is almost two hours, I’d guesstimate that there’s only thirty minutes of new material buried in there (at most), and you have to fast-forward through far too many recycled clips from the show (or rather, the first three series of the show) to actually see it. Meanwhile, you learn absolutely nothing about how the show is actually written, rehearsed, filmed and edited together… or the wider cultural impact the show has had, beyond some context-free footage of a random drag queen look-a-like contest!

Overall though I still think this is a great set… and on a nerdier tip, I’m glad they went with little plastic trays for all the discs, rather than the cardboard sleeves that they used for the American edition. The Yanks may get a fancier-looking box to put on their shelves, but keeping the discs scratch-free is a higher priority for me than eye-appeal!

A comic book writer with an interest in feminism, philosophy, and affirmative action. He/him.
View all posts by Dee CrowSeer →
This entry was posted in Rants about TV and tagged Ab Fab, AbFab, Absolutely Fabulous, Jennifer Saunders, June Whitfield. Bookmark the permalink.