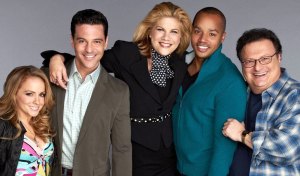 After I Hate My Teenage Daughter stank up the airwaves on Fox last night, another new sitcom debuted on a cable channel I’ve never even heard of, called “TV Land” (!?). The Exes stars Kristen Johnston as a nurturing Divorce Attorney named ‘Holly Brooks’, who coaxes her latest client, ‘Stuart’ (David Alan Basche), to take up residence in an apartment across the hallway from her own, which is already occupied by two other divorced fellas, played by Donald Faison and Wayne Knight (who previously romanced Johnston in 3rd Rock from the Sun, of course). The basic plot of this pilot episode finds the slightly fussy, touchy-feely newbie ruffling the feathers of his more insular, slobby room-mates, until Holly mobilises them to help intercept Stuart before he can go crying back to his wife, who (unbeknownst to him) has already hooked up with another man!

It’s may be a teeny bit formulaic, but it’s a good-hearted “hugging and learning” kind of show, and there are plenty of fun jokes along the way, delivered by an all-star cast of sitcom veterans. Frankly, as a fan of Johnston’s, it’s just a relief to see her playing a sympathetic starring role again, rather than gurning her way through another “grotesque” bit part. It is a little disconcerting seeing her on screen with Kelly Stables, who plays her sassy, pint-sized assistant Eden, though… the height difference between them just makes Johnston look like a giantess! Which is great for guys and gals who are into that, I guess…

A comic book writer with an interest in feminism, philosophy, and affirmative action.
View all posts by Dee CrowSeer →
This entry was posted in Rants about TV and tagged Kelly Stables, Kristen Johnston, The Exes. Bookmark the permalink.
%d bloggers like this: