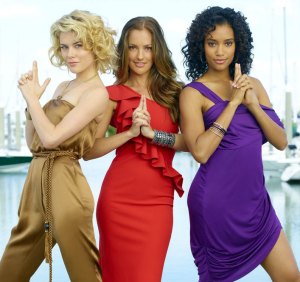 It was rather bizarre to see the E4 hype-machine making such a big fuss over the shiny new Charlie’s Angels series, since I already knew that back in the States the show had been cancelled shortly after the fourth episode aired, and only eight full episodes were ever produced. So why risk getting attached? Thankfully that shouldn’t be a problem, because there’s really nothing here worth getting attached to.

It’s pretty easy to see where they went wrong, when you consider this quote from co-creator Alfred Gough: “The characters are real and emotionally grounded, but they still like to have fun, wear great clothes, solve crime, and kick some serious ass… we hope to surprise people and bring a whole new generation to Charlie’s Angels.” Which seems pretty arrogant to me, since the movies only came out a few years ago, and were a huge success (commercially speaking) largely because of the “campy” and “retro” elements that he is so quick to cock a snook at. If you ask me, it would have been a much smarter move to develop a TV-budget-friendly spin-off from the movies, because they’d already established a far more interesting cast of characters than this series can manage. The Angels here, played by Annie Ilonzeh, Minka Kelly and Rachael Taylor, are all very pretty and athletic, but in a hopelessly generic and interchangeable sort of way… whereas the Angels that Cameron Diaz, Lucy Liu and Drew Barrymore brought to life all had distinct personalities, quirks, wardrobes and props. The decision to cast a cookie-cutter hunk in the ‘Bosley’ role just smacks of banality… and even ‘Charlie’ (voiced by Victor Garber) sounds bored by his underlings! Don’t get me wrong, I’m not going to sit here and pretend that the movies are anything more than cheesecake-flavoured bubblegum (!?), but they had a lot more warmth, humour and life to them than this “gritty reboot” could ever scrape together! 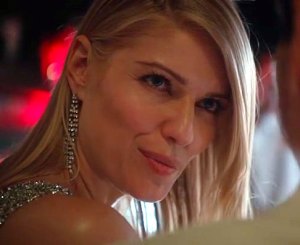 As for the pilot episode itself, the plot revolved around an investigation into a child slavery ring, which resulted in the untimely death of an Angel named ‘Gloria’, played by Nadine Velazquez (of My Name Is Earl fame). The two remaining Angels, ‘Abby’ and ‘Kate’, then grudgingly recruited Gloria’s childhood chum ‘Eve’, to help them track down the elusive mastermind behind their friend’s fiery demise. Part of their cunning plan involved kidnapping the main suspect’s slinky Slavic side-chick, ‘Nadia Ivanov’, played by none other than Ivana Milicevic! Her unexpected appearance (complete with Russian accent) was undoubtedly the highlight of the episode for me… but after her two woefully brief scenes, it was downhill all the way. Meh.