My TV guide described Deck the Halls (2006) as a “family comedy”, starring Danny DeVito and Matthew Broderick as “neighbours trying to outdo each other in festooning their houses with festive decorations and lights.” Anyone who’s actually seen this dreck will know that every word of that description is patently false… especially the “family” and “comedy” part.

For those who don’t know (and apparently my TV guide’s editors are among them), this weirdly salacious holiday flick stars DeVito as ‘Buddy Hall’, a mildly immoral car salesman who has just moved to a new town with his wife ‘Kelly’ (Kristin Chenoweth), and identical twin daughters, ‘Ashley & Emily’ (Sabrina & Kelly Aldridge). Despite the fact that he’s married to one of the cutest, chirpiest women alive, and should really be kissing the ground and praising the gods every night for his good fortune, Buddy is profoundly restless and unhappy with his lot, fearing that he still hasn’t made his definitive mark on the world. A chance encounter with a Google Earth-esque website, on which his new house is apparently invisible, inspires him to start blowing what little money the family possess on an increasingly lavish and gaudy LED lighting display, in the hopes that a cameo-ing Kal Penn will eventually confirm (in a fake “British” accent) that his domicile is now clearly visible from space! Buddy’s obsessive pursuit of arbitrary glory even drives him to sell an antique vase, which is identified in an earlier scene as a precious family heirloom and his unsuspecting wife’s most prized possession. Bastard! 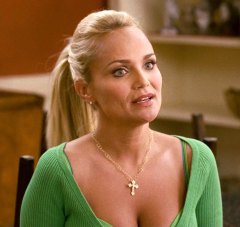 Now, if all of that formed the “A-plot” of the movie, it would probably be pretty decent holiday fare… the tale of a selfish man who loses the love and respect of his family, then makes a dramatic, tear-jerking bid for redemption in the final act. Unfortunately, this movie spends far too much time with ‘Steve Finch’ (Broderick), the uptight optician who lives next door to the Halls, and nurses a bitter grudge against his ambitious neighbour for usurping his status as the town’s resident Christmas expert! This grudge blossoms into a full-on sabotage campaign, which frequently backfires on Steve and his family… which includes a cookery-book editing wife ‘Tia’ (Kristin Davis), a sullen angsty daughter ‘Madison’ (Alia Shawkat), and a young son I couldn’t give a crap about (Dylan Blue). Apparently Gillian Vigman also has a supporting role as a wacky German townswoman named ‘Gerta’, but I can’t say I realised it was her until I checked the credits. Despite the best efforts of this all-star troupe, the jokes are painfully unfunny, the schadenfreude slapstick is just painful, and the character arcs are totally rote and perfunctory. There’s really nothing here to interest comedy fans, or Christmas fans either… so really the only people I can imagine actually enjoying the experience are those with a prurient interest in the female cast members (and, yes, I’ll admit that I probably fall into that category myself). Davis is as adorably doe-eyed as ever, and there were a couple of close-ups of Chenoweth where I just found myself marvelling at how beautiful she is… considering the wintry weather, she wasn’t shy about showing off her cleavage either! 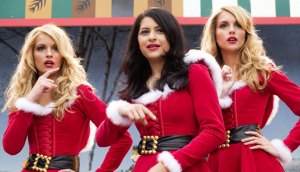 In fact, there are several scenes which err on the side of the slightly risqué… for instance, when Kelly first goes over to visit Tia at home, the pint-sized blonde asks for a boost up so she can hang a decorative plate on a hook, and Kelly ends up reluctantly handling Tia’s bottom, while young Master Finch is thrilled to discover a nearly-nude painting of Tia, also waiting to be hung! However, the biggest “WTF!?” moment comes during a scene at the town’s big WinterFest, where the two wives berate their husbands for being so petty and argumentative, before storming away in disgust. Grasping for common ground, the two men turn their gaze towards the stage where three sexy young “Santa Babies” strut out in revealing costumes, with their backs to the crowd and their hoods up. The “red-blooded” duo ogle the eye-candy, and Broderick even goes so far as to start yelling “Who’s your Daddy?” at the performers… only to recoil in horror as the three young ladies turn and lower their hoods, to reveal that they are in fact the pervy patriarchs’ own daughters! I would imagine that any parents who sat down to watch this movie with their kids would have a lot of explaining/bluffing to do. “Mummy, why is the Sheriff wearing women’s underwear?” isn’t the sort of question you’d normally anticipate having to answer on a cosy Saturday afternoon in front of the idiot box, is it? Oy!

A comic book writer with an interest in feminism, philosophy, and affirmative action.
View all posts by Dee CrowSeer →
This entry was posted in Rants about Films and tagged Alia Shawkat, Deck the Halls, Gillian Vigman, Kelly Aldridge, Kristin Chenoweth, Kristin Davis, Sabrina Aldridge. Bookmark the permalink.
%d bloggers like this: