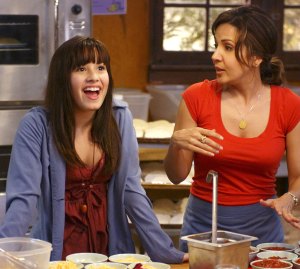 Camp Rock (2008) is a relatively small movie, but it challenges us to ask some pretty big questions, such as: Why won’t they let Julie Brown sing? Why did it take four credited writers to slap this derivative slop together? And why did I make myself sit through the whole thing?

For those who don’t know, this Disney Channel “Original Movie” stars the vastly overqualified (and totally adorable) Demi Lovato as ‘Mitchie Torres’, a young aspiring singer-songwriter who is desperate to spend her summer hols at the eponymous music camp, for to sharpen her skills. Sadly her parents can’t afford to send her alone, so her doting mother ‘Connie’ (Maria Canals Barrera) kindly offers to provide catering services for the camp, thus allowing Mitchie to attend at a reduced rate, in return for slogging away alongside her Mom in the kitchen. What follows is a fairly predictable play on the Cinderella story, with Mitchie in the “Cinders” role, and Joe Jonas as her “Prince Charming”, a spoiled pop star named ‘Shane Gray’, who has been press-ganged into teaching at the camp, to improve his public image. Instead of finding a mislaid glass slipper, he overhears (the unseen) Mitchie singing a beautiful song, while he’s busy hiding from his obsessive fans… but he’s too slow to catch her at the piano, and spends the rest of the movie brooding over the mysterious chanteuse of his dreams… even as he bonds with the stage-shy Mitchie in an everyday context. 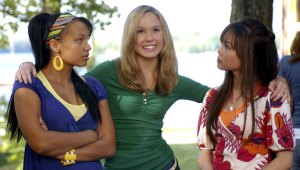 To continue my analogy, the “wicked stepmother” in this case would be ‘Tess Tyler’ (Meaghan Jette Martin), the camp’s veteran Queen Bee, who coasts on her mother’s fame and fortune, playing up to the role of domineering diva, while secretly wishing her Mom would stop being a celebrity long enough to give her a hug. Aw. Tess is flanked by two not-at-all-ugly flunkies, ‘Ella’ (Anna Maria Perez de Tagle) and ‘Peggy’ (Jasmine Richards), who willingly accept Mitchie into their ranks when she fibs about being the daughter of a big mover-and-shaker in the music industry… but only on the condition that she set her own dreams aside, and join them as part of Tess’s backing chorus for the camp’s annual battle royal, Final Jam! Of course, Mitchie and Tess part ways before the final act, but for some reason the writers try to crowbar in a character arc for Peggy too, with her suddenly growing a spine mere seconds before the trio are due to go on stage together, so that she can perform a solo song and win the whole dang competition! Hilariously, they even try to stoke up some ill-deserved sentiment while she’s singing by tracing her “journey” via flashbacks of Tess being mean to her in the past… but they only use three brief snippets, and the second one makes Peggy look obnoxiously smug, so the effect is rather spoiled. Also, who gives a crap about a shallow supporting character, who’s barely said or done anything of note for the previous eighty minutes? It’s the equivalent of Juliet deciding to elope with Friar John after she finds Romeo dead in the tomb. Friar who, you ask? Exactly. I guess they didn’t want Tess to win it (although there wasn’t much chance of that after her Mom-related onstage meltdown), and Mitchie was out of the running because she’d been framed for stealing her arch-rival’s charm bracelet, and they didn’t have any other likely candidates, so it almost makes sense… but it was still a pretty stupid “Hail Mary” curveball, if you ask me. 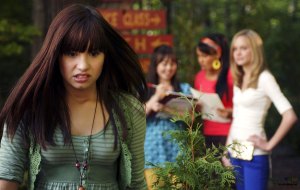 Sigh. I know it’s silly of me to take these things so seriously, but I was disappointed by how fakey most of the musical numbers were… I mean, this is a movie about kids making music together for the love of it, while dropping their pretensions and being honest with the world about who they are… but even when Shayne sings a soulful acoustic ballad to Mitchie as they sit beside the lake, he’s accompanied by ghostly backing singers! The worst offender though is Peggy’s big solo number, which throws up all sorts of logistical issues… I mean, if she’d spent all her time at camp following Tess around, when did she get the time to write and rehearse that song? And, since she was a last-minute, spur-of-the-moment entrant, how did the band know what to play? And why the hell was she holding a guitar, when she clearly even didn’t know how to pretend to play it? Even more egregiously, the actress playing Peggy didn’t actually sing the song she was lip-syncing to in the first place… according to Amazon, the soundtrack album credits a singer named Renee Sandstrom, who used to be in Kids Incorporated with Stacy “Fergie” Ferguson. Damn it, Peggy! You’ve undermined the integrity of this whole project!!!