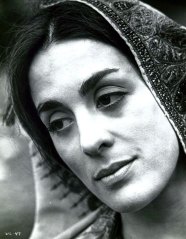 Last week BBC2 paid tribute to director Ken Russell, who died last November, by showing a couple of his most famous films. I recorded Women in Love (1969) out of random curiosity, and was pleasantly surprised when I saw Eleanor Bron’s name appear in the opening credits!

For those who don’t know, this highly acclaimed Britflick stars Glenda Jackson and Jennie Linden as ‘Gudrun’ and ‘Ursula Brangwen’, two middle-class sisters living in a 1920s mining town, who are drawn into the social circle of ‘Gerald Crich’ (Oliver Reed), the privileged and ambitious son of the town’s resident toffs, who own and operate the nearby coal mine. Gerald’s best-friend, and nudey wrestling partner, is ‘Rupert Birkin’ (Alan Bates), a rather tedious school inspector who is stepping out with ‘Hermione Roddice’ (Bron), a droll, domineering aesthete. To crudely summarise the rest of the story, Gudrun hooks up with Gerald and Ursula hooks up with Rupert, even though Rupert and Gerald seem far more interested in dry-humping each other!

Meanwhile, Hermione gets written out somewhere around the half-hour mark, which is a damn shame because I’d forgotten how much I adore Bron’s voice… and her eyebrows, of course! I was really digging her character here too… if only for the fact she had the good sense to try and crack Rupert over the head with a blunt, heavy object! Good lord, that man was a gobshite. I’m probably outing myself as a total philistine here, since the screenplay was based on a novel by D. H. Lawrence, but his dialogue reminded me of one of those game shows where contestants have to dive into quicksand to find a crystal or a key… you know there’s something useful and important somewhere under all of that sludge, but it’s such a slog to find it! I assume the only reason Hermione was never charged for the assault was that the police knew Rupert would try to represent himself in court, thus inciting the jury and judge to try attacking him too! I did like his line about “the finality of love” though… I mean, I’m not convinced Rupert believed what he was saying when he said it, but as a hopeless romantic I’m drawn to the idea that love can become “the centre and core” of your life. Actually, I’d rather think of it as the battery that drives your life… but sadly that’s just idle speculation at this point.

Overall, I wasn’t particularly impressed… but then I’m not a big fan of Drama in general, so I’m quite prepared to accept that this is a good film, that I simply couldn’t connect with…. and I did enjoy the earlier, funnier scenes (mostly involving Bron), even if the back-end was a bit of an endurance event.

A comic book writer with an interest in feminism, philosophy, and affirmative action. He/him.
View all posts by Dee CrowSeer →
This entry was posted in Rants about Films and tagged Eleanor Bron, Glenda Jackson, Jennie Linden, Women in Love. Bookmark the permalink.