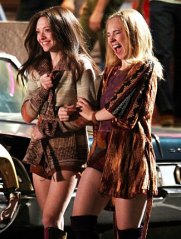 Okay, maybe that isn’t “news” as such… but it’s worth knowing all the same, I think. Normally I’m not that interested in leaked “on set” photos (or spoilers in general), but this one of Amanda Seyfried and Juno Temple sharing a joke as they strut down the street in skimpy clothing caught my eye, for some inexplicable reason.

As a so-called “male feminist”, I’m familiar with Andrea Dworkin’s hardcore anti-pornography stance, especially with regard to Deep Throat and Linda Lovelace’s gruelling experiences during the shoot, so I’m interested to see what angle this forthcoming biopic will take on the subject. If nothing else, this movie has a stellar cast, with Chloe Sevigny, Sarah Jessica Parker and Sharon Stone all getting name-checked in the pre-emptive buzz. Sadly, Temple’s character appears to be anonymous on IMDb, so I’m not sure how much screentime she’ll actually score in the finished product.

A most welcome artefact of NBC’s recent fancy-schmancy premiere for Smash, was this photo of series star Jack Davenport with his wife, Michelle Gomez… who has been sadly absent from our screens for far too long. According to Wikipedia, she gave birth to their son, Harry, in early 2010, so it seems selfish of me to want to drag her away from her wee bairn, just to make more comedy shows for me to laugh at… but dammit that woman is super-funny! And I miss those eyes and those cheekbones.

Following her Golden Globe win, Octavia Spencer is now up for a Screen Actors Guild Award and an Academy Award for Bestest Supporting Actress… so yay for her!

A comic book writer with an interest in feminism, philosophy, and affirmative action.
View all posts by Dee CrowSeer →
This entry was posted in Rants about Films, Rants about TV and tagged Amanda Seyfried, Andrea Dworkin, Juno Temple, Lovelace, Michelle Gomez, Octavia Spencer, Smash. Bookmark the permalink.
%d bloggers like this: