Of Wolf And Woman

Back in my role-playing days I always favoured werewolves over vampires, for several reasons: first of all, they didn’t have to go out and find a neck to suck on every evening to top up their blood pool (the way my luck ran, this would inevitably lead to a totally irrelevant and time-wasting bar brawl or police chase)… second of all, they had this whole New Age-y mythology working for them (at least in the White Wolf system, where they were cast as feral earth spirits and eco-warriors)… and third of all, I dug the way they could just “wolf out” at will, becoming super-strong and super-fast beast with razor sharp claws and fangs, for to inflict serious damage on those pompous, posing “leeches”. Nevertheless, vampires tend to get more movies made about them, because all it takes to turn an actor into a vamp is a bit of white face-paint, a pair of pointy teeth and maybe some contact lenses for effect… whereas werewolves have to be represented by animatronic “puppets” or CGI “cartoons”, which always tend to break the spell, no matter how much skill and craft went into their creation. Still, I remain hopeful that one day technology will allow us to make werewolf movies as fun and seamless as those adventures my friends and I used to play out in our imaginations… and until then, we’ll just have to make do with fair-to-middling filler like Red Riding Hood (2011)

For those who don’t know, this “dark fantasy” flick stars Amanda Seyfried as ‘Valerie’, a pretty young maiden living in the old-timey village of Daggerhorn, rather inconveniently located on the outskirts of a strangely spiky forest, where a big, bad wolf lives. For the last few decades the locals have been leaving sacrificial animals out for it to eat whenever the moon gets full, which seems to sate the wolf’s hunger and spare them any unpleasantness… until Valerie’s sister ‘Lucie’ is killed by their lupine persecutor for no apparent reason. The villagers’ misery is compounded by the arrival of ‘Father Solomon’ (Gary Oldman), an infamous witchfinder and monster hunter, who fills them in on a bit of basic werewolf lore before locking the whole village down, so he can discover who is to blame for the attacks, and drive the Devil out of their midst.

In truth, I found this movie quite enjoyable… but it’s the cinematic equivalent of a nice warm bath (i.e., the sort of thing you forget about as soon as the water’s gurgled down the drain). On the plus side, it’s a very pretty-looking piece (even when Seyfried isn’t on the screen!), and there’s something very appealing about the setting and mise-en-scène… the story’s fairly engaging too, even if it does strain a little too hard to throw suspicion on pretty much everyone Valerie happens to make eye-contact with. There were red herrings flopping around all over the deck! The love triangle between Valerie and her two potential suitors (the “bad boy” she loves, and the “good boy” her parents want to marry her off to) was a bit of a drag, but it didn’t get in the way of the wolf-y action too much. And Oldman’s always fun to watch, even if his character here was a bit of a threadbare cliché. 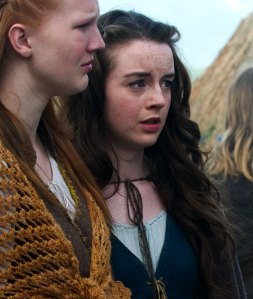 In fact, I’m not sure there were any standout characters for me… Seyfried delivers a solid performance in the lead, but it’s a little hard to sympathise with Valerie because the first time we meet her (as a child in a flashback) she’s plotting the murder of a poor defenceless bunny. Obviously that’s how life was back then, when hungry people had to catch and kill their own food… but her glee at the prospect of slitting its throat was a little off-putting all the same. Julie Christie put in quite a creepy, enigmatic turn as Valerie’s ‘Grandmother’, but her bizarre behaviour seemed to be dictated purely by the filmmakers’ love of misdirection, rather than any explicable, character-based motivation. I did get a chuckle out of how bitchy Valerie’s frenemy ‘Prudence’ (Kacey Rohl) was… and the scene where they dance together’s kinda sexy… but that’s about it, as far as comic relief goes.

Fun fact: A novelization was published before the movie’s “theatrical” release, but to keep the big reveal a secret, the book didn’t actually include the final chapter of the story… instead purchasers had to wait until after the movie’s premiere, to download it from the official website! What a swizz.

A comic book writer with an interest in feminism, philosophy, and affirmative action. He/him.
View all posts by Dee CrowSeer →
This entry was posted in Rants about Films and tagged Amanda Seyfried, Julie Christie, Kacey Rohl, Red Riding Hood. Bookmark the permalink.