Do You Know Where Your Towel Is?

Back in the day, I used to be a huge Hitchhiker’s Guide to the Galaxy fanboy… I read the books, I watched the show, I listened to the tapes, and I even attended a convention or two… so by the time the 2005 adaptation came around, I had quite literally “been there, done that, and bought the T-shirt”. Still, it’s been a few years since I exposed myself to any other iteration of the story, so I was hoping that second time around I would be able to appreciate the movie on its own merits… but apparently the voices of the original TV/Radio series cast members are so deeply ingrained into my psyche, I’ll never be able to escape them! Eep!

Ah, well… for those who don’t know, this comedy sci-fi flick stars Martin Freeman as ‘Arthur Dent’, a rather nebbish English “everyman” who is surprised to wake up one morning and discover that his house is about to be demolished in order to make way for a new bypass… but that’s not the only surprise that fate has in store for him! His own loss is promptly put into perspective when his best-friend, ‘Ford Prefect’ (Mos Def), hurriedly confesses that he is an intergalactic traveller, and that the Earth itself is about to be vaporised by an alien race known as the Vogons, to make way for a hyperspace bypass. The two men manage to “hitch” a ride aboard one of the Vogon destroyers, but they’re quickly ejected through an airlock by the ship’s outraged owners… only to be picked up seconds later by a stolen starship called the “Heart of Gold”, which is powered by an “improbability drive”, and piloted (in a fashion) by Ford’s “semi-half brother” ‘Zaphod Beeblebrox’ (Sam Rockwell), who was recently elected President of the Galaxy, but is currently on the lam. Playing Bonnie to his Clyde, is ‘Tricia “Trillian” McMillan’ (Zooey Deschanel), an adorkable Earthwoman Arthur had previously fallen for at a fancy dress party, before she was plucked from his timid, timorous grasp by the far more adventurous and brazen Zaphod. Perfunctory rom-com antics and wacky planet-hopping hijinks ensue. 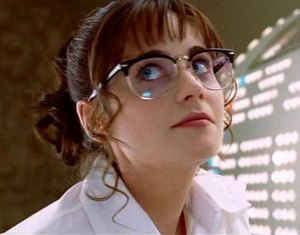 It’s a shame I can’t burn my pre-existing knowledge of HHG from my brain, so I could come to this movie with fresh eyes and ears, because I actually do like a lot of the performances here… particularly Bill Nighy’s adorable turn as ‘Slartibartfast’, the planetary artisan who won an award for his work on Norway… but once again the Curse of Compression, combined with the over-familiarity of the best jokes, prevented me from getting much out of the experience beyond mild amusement, and an appreciation for the fancy FX. Ultimately, I think it’s a story that’s better told in a longer form, and a medium where there are less concrete material constraints on the imagination, and digressive humour.

Fun fleeting cameos: Kelly Macdonald appears briefly as a foxy space-news reporter, and Helen Mirren provides the voice of ‘Deep Thought’, a computer built solely to answer the ill-defined “Question of Life, the Universe, and Everything” (SPOILER: It’s “42”)

A comic book writer with an interest in feminism, philosophy, and affirmative action. He/him.
View all posts by Dee CrowSeer →
This entry was posted in Rants about Films and tagged Helen Mirren, Kelly Macdonald, The Hitchhiker's Guide to the Galaxy, Zooey Deschanel. Bookmark the permalink.
Loading Comments...