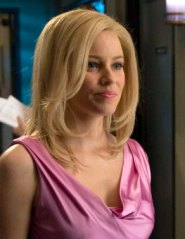 Last week I was lucky enough to have a friend lend me the fourth season of 30 Rock… but he handed me the boxset with a caveat: Beware Julianne Moore’s Boston accent… BEWARE!!!

To be honest, I did have a little trouble following what her character was saying when she first appeared, but it seemed to settle down when she returned in later episodes… although, if you type “Julianne Moore 30 Rock” into Google, the top suggestion after that is “accent”, so clearly it was something of a hot button topic at the time. Tortured vowels aside, I can’t say I warmed to ‘Nancy Donovan’ all that much, and I didn’t find the jokes she was given very funny… no, as far as Jack’s love triangle was concerned, I firmly favoured the ‘Avery Jessup’ angle. That’s partly because I thought Elizabeth Banks was so great in the role, and partly because I have a soft-spot for slightly scary, uber-conservative women (as comedy characters, I mean…. not so much in real life). Is it just me, or did she remind anyone else of ‘Regina George’ from Mean Girls? Maybe it was the same wig? 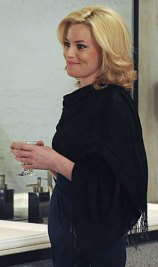 Overall, I felt the season was a bit of a let-down… the characters seem to be drifting a little, as the show becomes a broader, donkey-braying cartoon of itself. AV Club critic Todd VanDerWerff wrote an interesting article about the “dangerous decline” of the show, prior to the broadcast of this season, and I find myself agreeing with a lot of his concerns… although he’s quick to point out that “even at its worst, 30 Rock is still a very solid show.” And very funny too, of course… I just didn’t feel the same sort of obsessive zeal that I have in the past… and my Liz Lemon Love is definitely waning… although the scene in ep #4.20 where she goes to see Buzz Aldrin and ends up heckling the moon was just adorable. “You dumb moon! Don’t you know it’s day?” And I liked the weird “doomed to be together” dynamic she had with Michael Sheen’s character too… I normally tense up when a “British” character is introduced in an American comedy, but I think he did his homeland proud here. I especially enjoyed his delivery of the line: “I can’t go back to England. I can’t bear the thought of us hosting the 2012 Olympics. We’re not ready, Liz.” True dat.

Oh, and the appearance of an angry, overlooked ‘Josh Girard’ (Lonny Ross) in the opening episode reminded me how much I actually liked his character in the first season, and made me wish they’d used him more in subsequent seasons. Now it looks like he’s gone the way of The Dratch… :(

A comic book writer with an interest in feminism, philosophy, and affirmative action. He/him.
View all posts by Dee CrowSeer →
This entry was posted in Rants about TV and tagged 30 Rock, Elizabeth Banks, Julianne Moore, Liz Lemon, Tina Fey. Bookmark the permalink.