I spotted a couple of DVDs from the first season of Lizzie McGuire going cheap in a charity shop, and thought I’d give them a spin to see how they compared to the movie. Although the eleven episodes I saw weren’t presented strictly in broadcast order, I think it’s still possible to trace a rather disappointing devolution in the style and humour of the show, between the two discs.

In the original pilot, ‘Pool Party’, Lizzie’s parents (played by Hallie Todd and Robert Carradine) are presented as fairly sensible and sensitive grown-ups, who can be a little embarrassing at times but basically mean well… whereas in the later episodes, they behave like reckless and neglectful idiots, who are happy to go along with whatever wackiness the writers throw at them. For example, in ep #1.17 they deliberately leave ‘Lizzie’ handcuffed to her little brother ‘Matt’ (Jake Thomas) for the better part of a day to “teach them to appreciate each other more”, or some such bullshit. How did they expect their kids to go to the bathroom like that? So irresponsible! 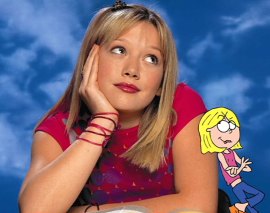 Essentially the show became a “live-action cartoon”, and there isn’t anything inherently wrong with that in theory, so long as the cast can pull it off… but this cast really can’t. Don’t get me wrong, I think they were all great in the earlier episodes, where the humour and storylines were a little more down-to-earth… but when they’re required to do oversized double-takes, or be chased around a studio lot by overweight security guards who keep eating even while they’re running, it just turns into a cringe-worthy pantomime, rather than a sitcom. And it undermines the whole premise of the show… which was, as I read it in the pilot, about an average teenage girl experiencing everyday teenage problems, while her inner thoughts and feelings were expressed directly to the audience via her cartoon avatar. If the live-action characters all behave like cartoons, then it rather negates the point of having an actual animated character on screen, n’est-ce pas? While I don’t doubt that the Australian show Mortified owes a substantial debt to this series, I think it was a far superior take on the same basic set-up. Granted, the lead character’s parents could also be pretty wacky at times, but overall it seemed to have a much more consistent and satisfying reality level, grounded by authentic adolescent emotions.

I think Hilary Duff still shines through as an engaging and appealing lead actresss, even if the exaggerated style of the show doesn’t really do her any favours. In fact, it probably wouldn’t be fair to judge anyone in the cast too harshly… although it was a little jarring when the school’s “Mean Girls” tried to laugh at someone en masse, because it always sounded so painfully forced and fake. As for the supporting cast, I spotted Kyla Pratt in a one-shot cameo, as ‘Brooke Baker’, a cute classmate that Lizzie’s guy-pal ‘Gordo’ (Adam Lamberg) starts dating, much to his friends’ surprise (ep #1.20). She doesn’t actually get to say very much, since she’s mostly there for the protagonist to stare at in dubious disbelief, but she does have to engage in a protracted snogging session, shot in extreme close-up, which I can only assume must be pretty embarrassing for a young actress. Oh, and several episodes also feature Dot Jones as ‘Coach Kelly’, the school’s gym teacher… so, does that make this show an unofficial prequel to Glee?