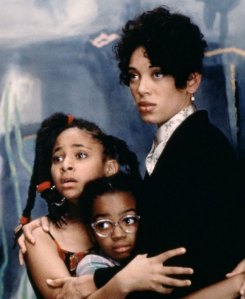 Still on a Kyla Pratt-kick, I picked up the “Dr. Dolittle” quadrilogy boxset in Asda, where it was on sale for a fiver!

For those who don’t know, Dr. Dolittle (1998), the first instalment in the series, stars Eddie Murphy as a serious, grown-up doctor-of-human-medicine, who rediscovers his repressed childhood ability to “talk to the animals” after nearly running over a dog in his SUV. Kristen Wilson plays his supportive-but-sceptical wife ‘Lisa’, while Raven-Symoné plays his hip-hopping eldest daughter ‘Charisse’, and Pratt plays her geeky, animal-loving baby sister ‘Maya’. Meanwhile, the voices of various wacky, wise-crackin’ animals are provided by an eclectic cast including Julie Kavner, Ellen DeGeneres and Jenna Elfman!

Overall, I thought this was an enjoyable family comedy, which unexpectedly morphed into a tense surgical drama in the final act, as Dolittle attempts to save a suicidal tiger with a blood-clot in his brain. My only complaint would be that, with a running time of just over 80 mins, it’s a bit too short and swift, leaving the relationships between the main characters a bit too “bare bones” (especially Dolittle and his father, played by Ossie Davis). Basically, I liked what I saw, I just wanted more of it! 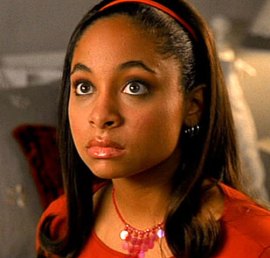 To some extent the first movie is just an “origin story”, establishing the hero’s powers, and laying the foundations for further adventures… and thankfully Dr. Dolittle 2 (2001) is the rare example of a sequel that actually improves on its predecessor. This time around, the good doctor is called upon to save a forest and its talkative inhabitants from being crushed beneath the bulldozers of an unscrupulous developer, by encouraging a pair of endangered, mis-matched bears (voiced by Steve Zahn and Lisa Kudrow), to mate. Cue some light legal drama and bumbling rom-com antics, as Dolittle tries to teach his clueless “circus bear”-buddy how to forage for food, assert his dominance, and flirt with the fairer sex! Kinda weird to have a kid’s movie in which the main story arc involves coaxing a character into coitus with someone he barely knows, but… um… they’re animals, so I guess it’s okay? And, to be honest, the bawdiness is a large part of the appeal of both movies… for example, I’m not sure how actual parents felt about the hibernation “butt-plug” joke, but I thought it was hilarious.

Meanwhile, Wilson, Pratt and Lil’ Miss Too-Good-For-A-Surname all returned, as the female members of the Dolittle family. Personally I found the subplot involving Charisse’s boyfriend (played by Lil’ Zane) painfully unfunny, largely because of Murphy’s sneering reactions to the sweet-but-dim suitor… and it never really paid off in any significant way, because the guy simply vanished before the third act, never to be spoken of again. On the other hand, I thought the scene where Charisse revealed that she shared her father’s gift was actually very sweet and properly moving. I haven’t seen much of Raven-Symone’s other work, but I really enjoyed her performance here… she even managed to make pointing to a window look kinda cool! Oh, and incidental animals voices were provided by Joey Lauren Adams and Mandy Moore.

I’m not going to pretend that these are classic, timeless comedies which reveal profound truths about our existence in relation to the animal kingdom… but I was pleasantly surprised by how funny, engrossing and off-the-wall they were. They aren’t just cheap, shoddy screen-fodder, churned out to separate undiscriminating kids from their pocket money… some care and craft has clearly gone into their production, and if I were a parent (gods forbid!) I’d be grateful for the opportunity to laugh along with my kids, even if we weren’t necessarily laughing at the same jokes for the same reasons.