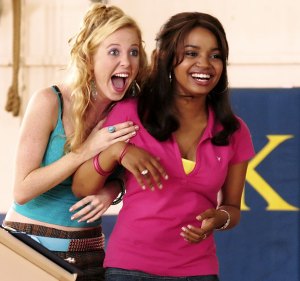 Having enjoyed the first half of the Dr. Dolittle quadrilogy, I was a little hesitant to take a crack at the straight-to-DVD second half… despite the fact that Dr. Dolittle 3 (2006) finds Kyla Pratt stepping up to the plate, as Maya struggles to control/suppress her own inherited powers, so that she can fit in with the cool kids at school. Why they decided to take the engagingly gawky girl-geek of the first two movies, and transform her into a cookie-cutter teen cliché, I couldn’t say… but it’s indicative of the overall laziness and conformity of the whole project, really. After a series of wacky animal-related mishaps, Maya’s mother (Kristen Wilson) sends the whining brat to “find herself” at a run-down dude ranch, where she winds up bonding with a bunch of two-dimensional misfits and engaging in the usual “snobs vs. slobs” shenanigans… eventually entering a rodeo competition to win a $50,000 prize, so they can save the impoverished ranch from closing, blah, blah, blah fishcakes.

I’d assumed the lower budget would mean they’d have to cut back on the talking critters… but it seems they decided to cut back on the funny jokes, surprising stories and character depth instead! D’oh! As a former Fat Kid myself, I was particularly offended by the portrayal of the token “big boned” boy here… besides the visual gag where he sits on a horse and it collapses under him (!), pretty much every joke made by him, or about him, was food related… and it’s also implied that he was a friendless loser back home. Memo to the writers of 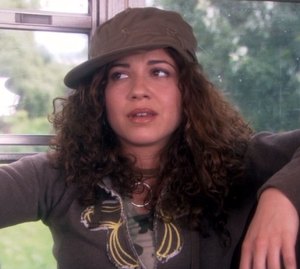 DD3: F*ck you! Seriously… just, f*ck you. Bizarrely, all the kids seemed to be suffering from some sort of inner-ear infection which caused them to fall over every time the slightest breeze blew… especially if they happened to be standing near wet mud at the time. Oy! The biggest laugh of the movie for me was the revelation that the ranch owner’s hunky son, ‘Bo’ (Walker Howard), had been ordered by his doctors to give up bull-riding, for fear that if he fell off one more time HE’D BE PARALYSED FOR LIFE!!! Not that being paralysed for life is funny… it’s just the way they threw that clunky exposition in a couple of scenes before the big competition, in an attempt to drum up some unnecessary, last-ditch drama.

DD3’s only saving grace is that it proves beyond a doubt that Pratt has the charm and the talent to carry a movie as the lead… although obviously it would be nice to see her given some better material to work with! Note: Although it’s heavily implied in the DVD extras that Pratt did her own singing, the end credits suggest that Porscha Coleman actually provided the vocals for the song she performs at the honky-tonk bar. Scandal! As for the other female cast members: Wilson gets surprisingly little screentime, as the only other surviving member of the original cast… Chelan Simmons has a couple of bookending scenes as Maya’s “ditsy blonde” bestie, ‘Vivica’… and Luciana Carro plays ‘Brooklyn Webster’, the quasi-tough-chick with a peculiar compulsion to jump up and down excitedly at the drop of a hat. Oh, and minor animal voices were provided by Jenna von Oÿ and Maggie Wheeler.

There’s a lot less slapstick in Dr. Dolittle 4 (aka Tail To The Chief) (2008), and far fewer offensive stereotypes… there’s also a slightly more novel plotline, with Maya being drafted to drop some psychotherapy on the President’s misbehaving pooch, in order to prevent an embarrassing international incident… but in the end, it winds up being the most forgettable of the four flicks. For one thing, the big reveal of why ‘Daisy’ (voiced by Jennifer Coolidge) keeps acting out is a total anticlimax… she just feels neglected because the President and his family pay more attention to world affairs than they do to her. Blah. I thought f’sure they were going to tie her bad behaviour in with the fact that the President’s teenage daughter, ‘Courtney’ (Elise Gatien), was also being a total pain in the ass, and sneaking off to attend lame parties in the woods (because apparently she’s a ninja, who can easily evade the Secret Service agents who should be guarding her?)… but no, they both have their own individual (and equally tedious) reasons for rebelling. As a Veep viewer, I was also disappointed that no one ever referred to Daisy as the “FDOTUS”.

Once again, Pratt shone like a shiny button in a totally unrewarding role… but I get the sense that she’d probably be happy to keep churning these things out until her character’s own kids were old enough to take over the family franchise!

Gatien doesn’t get much to do, beyond stomping around like a standard-issue stroppy sitcom teen… but the “Most Pointless Character Award” has to go to ‘Selma’ (Christine Chatelain), a snobby student intern who’s mean to Maya right up until Daisy goes missing, then she flip-flops for no apparent reason, before fading into total insignificance. Meanwhile, my favourite character was probably ‘Doris Park-Weaver’, the Dean of Admissions at the university Maya hopes to attend… although my main reason for liking her is that the actress, Stephanie Belding, had such a distinctive look going on. I’m not sure why, I just thought she had a great face for the part. Oh, and this time around the increasingly sidelined role of Maya’s mother was recast, with Karen Holness taking over from Wilson. While there are a couple of references to Murphy’s character being away on expeditions and such, no one ever mentions Maya’s older sister, ‘Charisse’… because continuity is for the weak, dammit!

(Note: Apparently there is a fifth movie in the series, titled Million Dollar Mutts, but it wasn’t released in this country, and I’m not crazy enough to pay real money for something like that)