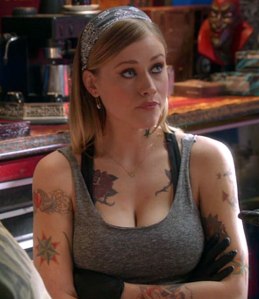 Watching this week’s episode of The Mindy Project (ep #1.16) , I couldn’t help being distracted by the toothsome tattoo artist who was inking up special guest star Seth Rogen’s shoulder. It was such a fleeting appearance I wouldn’t normally consider it worth blogging about, except for two things (no, not her boobs):

1) The actress playing the role was listed in the end credits as “Kolivia Taylor Dudley”, which got me wondering… “Who’s called ‘Kolivia’?” Well, not *her*, for one! Apparently it was just a typo, because her actual, factual name is Olivia… and she’s previously appeared in Don’t Trust the B—- in Apartment 23, Chernobyl Diaries and CSI: Miami.

2) As far as I can tell from the other photos available online, the tats she sports in this episode were all fake… which seems a little weird considering how small the role actually was (she had two lines, and one of them was “Next!”). Seems like it would have been quicker and easier to hire an actress who came with her own ink already embedded. Not that I begrudge Miss Dudley the work… I was just a little disappointed, is all.

A comic book writer with an interest in feminism, philosophy, and affirmative action. He/him.
View all posts by Dee CrowSeer →
This entry was posted in Rants about TV and tagged Olivia Taylor Dudley, Punkiness, The Mindy Project. Bookmark the permalink.