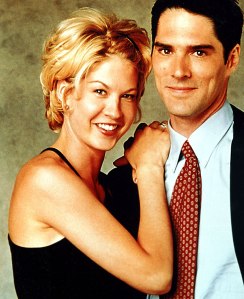 I recently picked up the first season boxset of Dharma & Greg, so I could revisit the story of an upright, uptight young lawyer who falls madly in love with a carefree, chaotic dog-walker/yoga instructor. They first encounter each other, briefly, on the subway as children, then decades later they cross paths again and feel an instant, soul-deep connection… which leads to an impulsive marriage ceremony, and a lifetime of trying to reconcile their contrasting beliefs, class differences, and conflicting families. Hilarity and heart-warming romance ensue.

According to one of Chuck Lorre’s many amusing (and occasionally insightful) vanity cards, he and his co-creator, Dottie Dartland, originally conceived D&G as “a series revolving around a woman whose personality is not a neurotic product of societal and parental conditioning, but of her own free-flowing, compassionate mind”… and one of the things I love about the show is that even when an individual episode’s plotline might seem a little samey on the surface, Dharma always brings a fresh perspective and energy to the old-timey sitcom tropes. And there 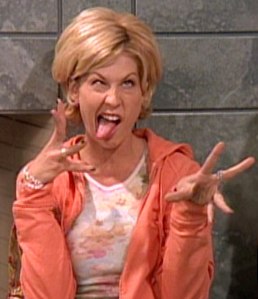 are plenty of unique scenes and storylines (such as helping a Native American elder to die with dignity in ep 1.7) that could pretty much only occur in a show with such an enlightened and empathetic hippie-chick heroine. She just approaches the world in such an enthusiastic and open-hearted way, I can’t help idolising her, and wishing I could absorb some of her spirit through the TV screen. As far as I’m concerned, Dharma’s the most adorable and inspiring sitcom character of all time… that’s partly down to the writing, of course, but also down to the unbridled joy and playful gusto that Jenna Elfman brings to the role. Bless her.

American shows often take a while to find their groove, so it’s remarkable to see D&G hit the ground running right from the start, with its fertile odd couple(s) premise, combined with an uplifting love story, and a practically perfect blend of supporting characters played by a supremely talented cast. One of the funnest aspects of the show is the role-playing “adventures” that Dharma goes on with her snarly, spiky BFF ‘Jane’ (Shae D’Lyn)… my favourite from this season being the one where they decide to go shopping for Thanksgiving dinner as “Old-fashioned 50s Housewives” (ep #1.5), and convince Greg’s slobby-sleazy co-worker ‘Pete’ (Joel Murray) to ride in their trolley and pretend to be a baby. Fun! Dharma also has an admirably close relationship with her touchy- 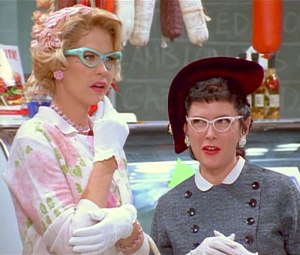 feely mother, ‘Abby’ (Mimi Kennedy), and pot-addled father, ‘Larry’ (Alan Rachins). I might find the “right-on hippie” stereotypes more offensive, if they weren’t played with such genuine affection, and balanced out by Greg’s equally stereotypical “uptight WASP” parents, ‘Edward’ and ‘Kitty Montgomery’ (Mitchell Ryan and Susan Sullivan). Both couples are funny enough in their own right, but the sparks really fly when they all get together, and attempt to have a civil (or not) conversation.

There were also some fun cameos by the likes of Yeardley Smith, as Greg’s snarky secretary ‘Marlene’ (recurring)… Laurie Metcalf as ‘Spyder’, a fear-mongering self-defence teacher who steals all of Dharma’s yoga students (ep. 1.11)… Lindsay Sloane as Greg’s wayward-teen cousin ‘Jennifer’ (ep 1.12)… and Jane Seymour as ‘herself’, an exasperated English actress who is pressganged into teaching Dharma how to lie to her husband (ep. 1.19).

Note: In case you’re as confused/disappointed as I was by the lack of “Outtakes” promised on the back of the (UK) boxset, they’ve actually been hidden away as “easter eggs” across the three discs. They’re barely worth the effort, but in case you’re a completist like me: Disc One… select the episode “The Ex-Files” from the main menu, then Down to “scene selection”, and press Left until a yin-yang symbol appears, then press Enter. Disc Two… select “The Second Coming of Leonard”, then Down to “disc main menu”, then Left. Disc Three… select the Special Features menu, then down to “Reaching Your Inner Dharma”, then Left (this time hearts appear, instead of a yin-yang).