Sad news from the NBC upfronts: Fledgling sitcom The New Normal won’t be returning for a second season, thanks to low ratings and a general lack of critical interest. Admittedly, I thought the show took a while to settle down into a comfortable groove, so I can understand why it might have had trouble building an audience… but I’d grown very fond of the characters by the finale, and I’m disappointed that I won’t get to hang out with ‘Goldie’, ‘Shania’, ‘Bryan’ and ‘David’ again, and see how they cope with caring for a new-born bairn. As Bryan himself noted (in a quote reposted on the show’s FaceBook page earlier this week), “The minute you start to love something, you accept the risk that someday it might not be there”. True that. Hopefully the cast will all find new projects worthy of their inestimable talents… because I demand more opportunities to crush on the utterly adorable Georgia King, dammit! 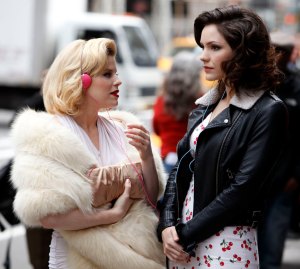 Far less upsetting was the news that Smash has also been cancelled, after a rather dismal second season. I didn’t watch it myself, but I have been reading weekly episode reviews, and indulging in some vicarious schadenfreude. I know a lot of people liked to “hate-watch” the show, but I was always more of a “hope-watcher”…  the show had such a great setting, and such a stacked cast, that I kept willing the writers to free their cast from the mire of romantic melodrama, and find a more suitable way to showcase their musical and comedic skills… but it just never happened. Megan Hilty deserves to be a superstar, but the show kept trying to sell ‘Karen’ as ‘Ivy’s’ equal (or even her superior… as if!), and that never made a lick of sense to anyone outside of the cock-eyed fictional universe they’d created. So, lower the curtain… dim the marquee lights… etcetera…

[Note: The New Normal – Season One (and only) will be released on DVD in the UK, on September 30th. Still no sign of a Don’t Trust the B—- in Apt. 23 release though… or Perfect Couples for that matter… *sniffle*]

A comic book writer with an interest in feminism, philosophy, and affirmative action. He/him.
View all posts by Dee CrowSeer →
This entry was posted in Rants about TV and tagged Georgia King, Megan Hilty, Smash, The New Normal. Bookmark the permalink.