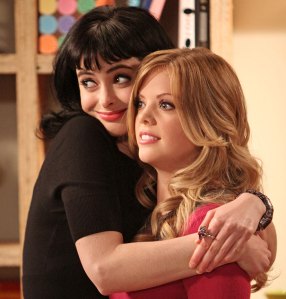 Now that so many of my fave shows have shut up shop for the summer, I was thrilled to read that ABC had decided to burn off eight unseen episodes of Don’t Trust the B—- in Apartment 23 via their own website, iTunes, and Hulu. As regular viewers of this criminally underrated (and randomly ordered) series might expect, this batch of “new” episodes includes a leftover from the first season (complete with continuity-thwarting “Dancing With The Stars” references), but the other seven are all from the second-season, and can be viewed in their intended, scripted order. Hurrah!

Note: According to the ABC site, these episodes will turn back into a pumpkin (i.e., stop streaming) on June 2nd, so get ‘em while they’re hot!

A comic book writer with an interest in feminism, philosophy, and affirmative action. He/him.
View all posts by Dee CrowSeer →
This entry was posted in Rants about TV and tagged Don't Trust The B----- in Apartment 23, Dreama Walker, Krysten Ritter. Bookmark the permalink.